For over 30 years, Harvey Rosenbloom has been at the front lines of packaging innovation. As the owner of polyethylene grocery bag manufacturer Hymopack Ltd. and polystyrene foam tray maker Dyne-A-Pak Inc., he's been a key player in moving plastics into the supermarkets, and in moving the supermarkets into a new age of consumer convenience. He's now been selected as the CPIA's 2010 Leader of the Year. Question: What took them so long? 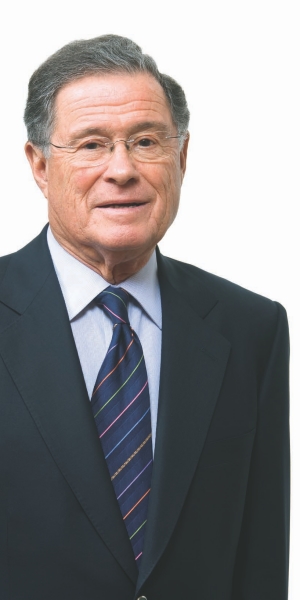 It seems only fitting that Harvey Rosenbloom has been chosen as this year’s Canadian Plastics Industry Association (CPIA) Leader of the Year–he’s been a leader in the plastic packaging and bag making sectors for over 30 years now, anyway.

This just makes it official.

In 1977, the Rosenbloom group of companies acquired Toronto-based plastic bag manufacturer Hymopack Ltd., and Rosenbloom has been blazing a trail ever since. Under his guidance, the company first promoted the so-called “Thick-Thin, Wave Top Bag,” a sophisticated product that involved manufacturing a sheet of film with different thicknesses so that the handle could be thicker than the body of the bag. He then led the company and its customers through a transition from paper bags to low density polyethylene (PE) carryout grocery bags for the supermarket industry. Not done yet, he orchestrated Hymopack’s subsequent move to high density PE carryout bags, once again helping nudge the supermarket industry towards a new era of consumer convenience.

As if that’s not enough, Rosenbloom has been guiding two other manufacturing companies all the while: Aspamill Inc., a Montreal-based manufacturer of paper bags; and Dyne-A-Pak Inc., a manufacturer of polystyrene (PS) foam trays headquartered in nearby Laval. With Dyne-APak too, the pattern of innovation isn’t hard to spot: Under Rosenbloom’s watch, the company has been a key player in moving the industry from pulp trays to expanded PS foam trays for produce, fish and poultry.

FROM PAPER TO PLASTICS

For someone who continues to leave a large footprint in plastics packaging, it’s more than a little ironic that Rosenbloom got his start in the competing world of paper.

A Montreal native, Rosenbloom cut his entrepreneurial teeth in the early 1950s, working in the family business: an outfit called Rosenbloom Paper Supply Co., which manufactured and distributed carryout paper grocery bags. “In those days, plastic wasn’t an important part of the packaging world,” he said. “But this changed for me in 1977, when our company purchased Hymopack, which was then a small poly extruder and converting company.” Although Rosenbloom was by then taking notice of plastics, the majority of the packaging world still wasn’t. “At that time, the only successful users of plastic bags for retail were Marks & Spencer in the UK and Simpson’s in Canada,” he said. “We purchased Hymopack strictly as a learning experience, on the off-chance that either low or high density retail bags would start capturing a portion of the paper bag market.”

In truth, Rosenbloom said, the acquisition of Hymopack was less a vote of confidence in the long-term staying power of PE grocery bags than a natural sideways expansion. “By the late 1970s, our distribution company was distributing plastic bags anyway; when Hymopack came up for sale, it just seemed a simple and natural step to buy it,” he explained.

The same logic led to the purchase of Dyne-A-Pak when that company was up for grabs in 1980. “Dyne-A-Pak had been our leading supplier of foam trays, so, again, acquiring the company when it became available was the obvious move,” Rosenbloom said.

KEEPING UP, GIVING BACK

Cut to the present: Even as Hymopack and Dyne-A-Pak are firmly positioned as leaders in their respective packaging segments–and also as two jewels in the crown of parent company The Rosenbloom Groupe–neither organization is resting on its laurels. When a fire ravaged Dyne-A-Pak in September 2004, destroying approximately 40 per cent the 180,000-square-foot facility, including production and warehouse areas, the plant was quickly rebuilt; today, the company is leading the foray into bioplastic packaging with its fully certified, D6400-approved “Nature” line of compostable foam meat trays, made using cutting-edge biopolymers. Hymopack, meanwhile, continues to manufacture a wide variety of bag styles in high density, low density and co-extruded film.

As befits two heavy hitters like Hymopack and Dyne-APak, key company personnel have volunteered their time to industry associations, sometimes at Rosenbloom’s gentle behest. Senior staff members have served on several committees with the Plastics Film Manufacturers Association of Canada over the years. Most recently, Rosenbloom encouraged Gerry Maldoff, president of Hymopack, to chair the CPIA’s Plastic Bag Task Force.

The streak of philanthropy extends into Rosenbloom’s own personal life. He currently sits on the Foundation Board of Montreal’s Jewish General Hospital, and is also an active fundraiser for Alzheimer Groupe (AGI) Inc.’s programs for patients and their caregivers in his community.

TAKING STOCK OF THE PRESENT

But to return to plastics: Rosenbloom is confident that plastics packaging in general will remain a growth industry in the years to come, despite encroaching legislation and a level of bad press unimaginable when he began making his mark in the boom years of the 1970s and 1980s. “The question for critics of plastics is, ‘What do you propose as an alternative?’ ” he said. “As someone who also supplies and promotes paper bags, I can tell you that paper isn’t any more user friendly as an alternative, and also has the same issues with disposability.”

This isn’t to say suppliers of front-end plastic bags and other packaging formats won’t have to make compromises going ahead, he continued. “If we want to survive, the packaging industry is going to have to accept new compromises with retail stores that limit the use of, or charge a fee for, carryout plastic bags,” he said.