New business has this resourceful fabricator, known throughout Canada for its taxi roof lights, looking to buy an affordable vacuum thermoforming machine. 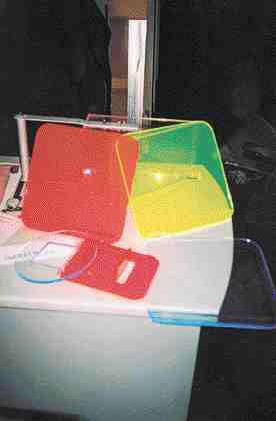 These shelves for telephone display were made from colored acrylic sheet.

The product line of Plastic World and Design Ltd. (Dartmouth, NS) has traditionally covered a little bit of everything, including bulk food bins, display cases, brochure holders and even aircraft components. The company has made its reputation, however, on custom-designed, thermoformed taxi lights.

Kenney, who quit his job as a survey geologist to form the company in 1992, sells the bulk of his taxi light business through a distributor in Ontario. He recently began supplying the distributor with lights made from a UV-stabilized, white co-polyester (PETG) grade. Kenney says the material has enhanced durability and strength in comparison to standard acrylic or PET sheet. He is using a clear grade of PETG to make menu holders for the Pizza Delight chain of restaurants.

One of Kenney’s latest orders has been from Via Rail for large, custom coolers to hold food trays in cold storage on short-run trips. The coolers are made from ABS sheet sandwiched around an inner layer of polyurethane foam insulation. Kenny has made approximately eight coolers and expects more orders. Via has found that the coolers keep food frozen up to three days. Other current business includes a large order for bulk storage bins for Atlantic Wholesalers Superstores and acrylic display cases for Dalhousie University.

Kenney is by necessity as much a designer as manufacturer. Customers often approach him with nothing more than a rough outline for a product design and ask him to come up with a solution. He describes his thermoforming technique as “old fashioned” but effective. Molds are meticulously handmade from wood and fitted to a fixture. A pump is used to draw a vacuum and form a sheet of plastic that has been heated in an oven. While effective for some parts, the technique is limited in the size and complexity of parts it can make, and is low efficiency. Kenney is looking to purchase a used vacuum thermoforming machine but has had difficulty finding a source in Canada.

He is also interested in entering the injection molding market for small components, either with a partner or on his own under the right conditions.

“The business conditions are improving in the Halifax area,” he notes. “It might be a good time to expand our horizons.”