From bag lady to leading lady: Emmie Leung has risen from driving a rented van for her one-woman curbside recycling company to being the CEO of Emterra Group. 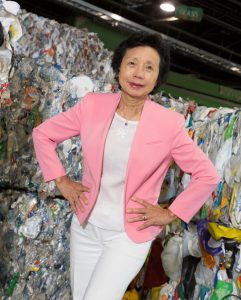 Big outcomes can hinge on small incidents – sometimes as small as taking a walk. Pierre Trudeau famously decided to run for the Liberal leadership in 1968 after going for a walk in the snow, and the ultimate result was his 16-year tenure as Canada’s prime minister.

Emmie Leung, the founder and CEO of Burlington, Ont.-based recycler Emterra Group, had her epiphany in a similar way. In 1976, Leung was a recent commerce graduate of the University of Manitoba looking for a job. Walking around her Winnipeg neighbourhood one day, she noticed great piles of newspapers and cardboard set out for garbage collection, and had the sudden realization that she could sell them in China. She moved to Vancouver to be closer to core transportation hubs, and has been a pioneer in the recycling and waste diversion industry in Canada ever since. Along the way, Leung has garnered more awards and accolades than some film studios have Oscars – the most recent of which is being named as the Canadian Plastics Industry Association’s Leader of the Year for 2018.

Born and raised in China, Leung immigrated to Winnipeg to study in 1972. The original company she founded in Vancouver in 1976 was called International Paper Industries (IPI) and started as a one-person curbside recycling business. Leung rented a van and loaded it herself until it was full and stored the papers in her backyard until she had enough to fill an overseas container; she was the driver, loader, warehouse shipper, shipping coordinator, and bookkeeper.

Recycling was in its infancy in those days, and Leung quickly became a recycling pioneer and guru, making an example of how to turn waste into dollars. “I came from a country where resources were scarce, so I could see the value in recycling – when I see waste, my first thought is, how can we turn it into something of value?” she said. “In Canada at that time, however, people didn’t know there was value in paper and boxes, and they came to me as an expert.” Indeed, recycling was such a new concept in Canada that Leung’s background and gender – which were unique for an entrepreneur in those days – didn’t even matter. “Everyone started calling me the ‘bag lady,’ but my customers didn’t look at me as a woman or Chinese,” she said. “In business, it’s all about what you can do to provide value to a customer, and I could do that. I’m the type of person that if I want to do something, nobody can stop me.”

When IPI started to expand into municipal curbside recycling, Leung instigated the first ever “blue bag” program to collect recyclables, a system that continues to be used in some municipalities throughout Canada. As waste diversion and recycling gained momentum during the 1980s, IPI expanded, opening the first material recovery facility (MRF) in Surrey, B.C. in 1982. In the 1990s and 2000s, IPI grew beyond B.C., establishing an offshoot called Halton Recycling Ltd. in Ontario in 1995; starting its first single stream MRF in Manitoba in 2003; acquiring Canadian Liquids Processors Ltd. in Ontario in 2004, which specializes in confidential product destruction and recycling sugar- and alcohol-based liquids into ethanol; and opening a tire recycling company called Canadian Eco Rubber Ltd. in Brampton, Ont. in 2005, which collected and processed used and scrap tires from across the province. In 2008, the group of companies were brought together under the new name and brand of Emterra Group.

Today, Emterra Group consists of the Emterra Environmental and the Michigan-based Emterra Environmental USA divisions, which are recycling and waste resource management companies; Emterra Tire Recycling; Canadian Liquids Processors; and Ryse Solutions, Canada’s first fully integrated producer responsibility organization that offers compliance and advisory services and material recovery solutions under one umbrella. Together these division and companies operate 31 material recovery facilities and offices in B.C., Saskatchewan, Manitoba, Ontario, and the state of Michigan – handling everything from paper products and packaging to used tires to yard and kitchen waste to trash – and employ more than 1,100 people. Emterra sells processed aluminum, various types of plastics, newsprint, cardboard, steel, and rubber all over the world.

Leung’s involvement with plastics recycling became more pronounced in 2016, when she and Tony Moucachen, the president of Delta, B.C.-based Merlin Plastics Group, founded ReVital Polymers. The two formed a partnership to acquire the assets of a former plastics recycling facility in Sarnia, Ont. that had gone into receivership, which included an 180,000-square-foot recycling facility. Said to operate the first recycling plant in Canada that combines a Container Recovery Facility and a Plastics Recovery Facility under one roof, ReVital accepts post-consumer plastics recovered from municipal recycling programs across Canada and the U.S., and uses a closed-loop process to recycle materials into raw materials for use in manufacturing again. “ReVital uses state-of-the-art technology that sorts and converts waste plastics into resin types that are tailored to specific customer end-use applications, so that processors can make new products and packaging with recycled content for any sector,” Leung said. “I’m not in favour of plastic bans – I’m in favour of keeping all types of post-consumer plastic, especially single-use plastic, out of landfills and in continuous use, and ReVital helps us get closer to that goal.” 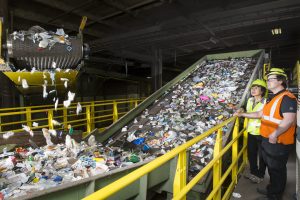 Leung on the shop floor at ReVital Polymers.

Leung and Moucachen have also recently combined the market presence of their three extended plastics collection, processing, and recycling companies – ReVital along with Merlin Plastics Group and Emterra Group – to launch the Circular Polymers Group (CPG), said to be North America’s largest plastics recycling consortium. These companies currently operate 38 multi-materials handling and recycling facilities in B.C, Alberta, Saskatchewan, Manitoba, and Ontario, as well as in the U.S. states of Oregon, California, and Michigan. In 2017, CPG collected and recycled well over 140 million kilograms of plastics from residential curbside recycling systems, beverage container deposit-return systems and the industrial, commercial, and institutional sectors across Canada and the U.S. “While each of our companies will continue to do business individually, we work synergistically to offer our customers our combined recycling expertise; in that sense, CPG is a consortium company,” Leung said. “As one of the 38 plants in CPG, ReVital has a niche within that group to deliver programs and services that help improve post-consumer plastics recovery. Our technologies to collect, sort, and recycle plastics could be implemented in developing countries, for example, which might help dramatically reduce the millions of tons of plastics discharged into the world’s oceans every year from developing nations.”

During the course of her four-decade rise from one woman with a rented truck to the head of Emterra Group and the co-owner of ReVital, Leung has garnered her fair share of awards, including the Ernst and Young Entrepreneur of the Year for Energy and Cleantech in 2014, being ranked 15th in Canada’s Top 100 Female Entrepreneurs by Canadian Business and Profit magazine in 2015, and receiving the University of Manitoba Distinguished Alumni Award for Professional Achievement in 2016.

But being selected as CPIA’s newest Leader of the Year has its own meaning, she said. “I owe this award and recognition to my team, and I want to thank them for supporting the organization and everything we stand for,” she said. “We all want to build a sustainable environment for today and for the future, and as long as we keep working with a single focus to develop closed-loop processes that recycle plastic into raw materials for use in manufacturing again, plastics can be part of the solution, not the problem.”

It’s not a bad destination for a journey that started with a walk around the block in Winnipeg more than 40 years ago.