DMS executive gets the Red Carpet treatment in Georgia

With Ontario manufacturers struggling to remain competitive under the combined weight of the province’s Green Energy Act and cap-and-trade legislation, it’s instructive – and a bit sobering – to realize just how hard other regions are working to actually encourage economic development.

Just ask Mike Hicks, vice president of Windsor, Ont.-based mold component supplier DMS Components. Hicks attended the four-day, invitation-only Red Carpet Tour in April 2017, an event organized by the Georgia Chamber of Commerce to showcase the southeastern state’s attractiveness for new business investment. Thirty business leaders from throughout North America traveled to Atlanta to attend the event, each being paired with a Georgia industry leader to provide first-hand accounts of what it’s like to run a business in Georgia. Since its inception in 1959, the Red Carpet Tour has generated more than US$3.2 billion in revenue for the state, and over 15,000 jobs have been created through the expansion or growth of tour guest companies. Although guests visit different regions of Georgia each year, attending the Masters Tournament at Augusta National Golf Course, golf’s most storied championship, is a Red Carpet Tour tradition. 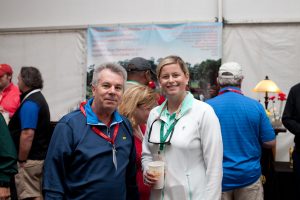 “I was initially contacted in late 2016 by a representative of the Georgia Chamber of Commerce and invited to attend the April 2017 event,” Hicks said. “They got my name from the SAE World Congress in Detroit, which I had attended, and told me they were targeting automotive-related companies for the 2017 Red Carpet Tour. They knew that DMS has branch locations in California and Illinois, so we’re very familiar with the auto sector and with doing business in the U.S. There was one other Canadian who participated – a representative from a Toronto-area company that’s also involved in automotive.”

MASTERS OF THE HOUSE

The 2017 Red Carpet Tour – which was sponsored by a number of Fortune 500 companies, including AT&T, Coca-Cola Co., UPS, Wells Fargo, and Delta Airlines – had an impressive itinerary: a reception and dinner with Georgia governor Nathan Deal and his wife at the Governor’s Mansion in Atlanta on the first night; a private Delta charter flight to Augusta to attend the first round of the Masters the next day, dinner at the tournament, followed by another private charter flight to Athens later that night and a private reception; business seminars and a tour of the University of Georgia Special Collections Library in Athens on the third day, followed by another private dinner reception; and on the last day, a ride in a chartered coach back to Augusta to attend the third round of the Masters, followed by yet another private Delta flight back to Atlanta for connecting flights home. “Unfortunately, the reception and dinner with the governor and his wife on the first night was cancelled due to a severe thunder storm in Atlanta that prevented many of the attendees’ flights from arriving on time,” Hicks said. “Meeting with the governor is the traditional kick-off for the Red Carpet Tours, and ours was the first time ever that it had to be scrapped.” But everything else on the tour ran like clockwork, including attending the Masters. “We entered the Masters through a private entrance on a red carpet and were met by Augusta staff and some of the tournament organizers, and had access to restricted areas,” Hicks said. “We also met some of the golfers and caddies, and then had dinner in a private hospitality tent at Augusta.”

Getting the red carpet treatment at the Masters.

And the red carpet treatment wasn’t limited to the golf tournament. “All of our charter bus trips had police motorcycle escorts that cleared traffic to make sure we arrived at our destinations on time,” Hicks said. “We stayed at the InterContinental Hotel in Atlanta; the actress Lisa Kudrow was also staying there and she asked our group why we had a better security escort than she did.” 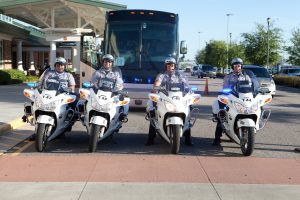 The return-on-investment goal of the Red Carpet Tour, Hicks said, is to convince one of the 30 guests – who are all decision makers at their respective companies – to invest somewhere in Georgia. “The tour sponsors didn’t want us to relocate an existing operation, but only to consider Georgia as a site for new business development. It was a soft-sell approach: they used all the resources at their disposal to get our attention and interest, but they weren’t trying to buy our support.”

It was also a first-class affair from start to finish, Hicks said. “It was definitely a once-in-a-lifetime experience, and our only expense was our arrival and departure flights – everything else was paid for by the sponsors,” he said. “The tour operators, led by Sara Melvin of the Georgia Chamber of Commerce, did an outstanding job of showcasing Georgia’s business community. My partner during the tour was Anna Chafin, CEO of Development Authority of Bryan County and current chair of the Georgia Economic Developers Association, and she was very informative and helpful as well. I keep in touch with both Sara and Anna. My first allegiance will always be the Windsor area, but I have acted as an ‘ambassador’ for Georgia a few times since, recommending the state to some business acquaintances.”