Researchers at Reed College in Oregon are growing colonies of bacteria that break down the notoriously resilient PET. 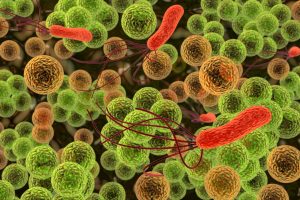 When it comes to post-consumer plastic waste, polyethylene terephthalate (PET) is all-too ubiquitous. PET is found in plastic bottles – about 500 billion bottles per year – microwave containers, and more, and its incredible durability, which comes from its long tough strands of ethylene glycol and terephthalic acid monomers, means that it persists for decades after use, clogging rivers, beaches, forests, and waterways.

But probably no one ever thought of eating PET waste as a means of disposal, until now. In a paper published in mSphere, the open-source journal of the American Society for Microbiology, Prof. Jay Mellies and students at Reed College in Portland, Ore., reported on colonies of bacteria that can break down PET. And it gets weirder: The colonies don’t consist of a single species, but are composed instead of a consortium of five different types of bacteria that work synergistically to consume PET and convert it into a source of energy. “The novelty of our work is that we are using a group of bacteria to biodegrade PET plastic, whereas most efforts to date have focused on individual, isolated enzymes for this purpose,” Mellies said.

The genesis of the project is an earlier study by one of Mellies’ previous students that determined that bacteria has the ability to evolve to feed on hydrocarbons in PET. It was a breakthrough at the time because PET is notoriously nonbiodegradable, and yet somehow the bacteria had figured out a way to break it down.

With the support of a grant from the National Science Foundation, Mellies and a new crop of students delved deeper into the phenomenon. They began by taking a closer look at the bacteria’s production of hydrolases, enzymes that bacteria (and other organisms) use to digest food.

Working with 192 separate colonies of soil bacteria, the Reed team spent months culturing them on PET and found that, after an eight-week trial, the PET in one of their samples had lost 3% of its mass. The bacteria had eaten it. Under the microscope, the students saw tiny holes where the microbes had chewed through the PET.

More remarkable still, the successful sample contained five different strains of bacteria living side by side, with some strains breaking down the PET into components that other strains could digest, and so on. “These bacteria are cooperating,” Mellies said. “It’s crazy, but they’re working together to degrade the polymers.”

Having established that their consortium can indeed degrade PET, the Reed College team is now focused on the next step: finding ways to make the process more efficient. The genetic pathways underlying hydrolase production and PET degradation are still not fully understood, but with new tools such as metagenomic sequencing, Mellies is convinced that Reed students can boost production of enzymes that break down PET and hasten the bacteria’s evolution. The potential upside is huge, Mellies believes, not only for fighting pollution, but also for harnessing microbial symbiosis for other problems.