Three years after its founding, Sierra Automation Inc. is running flat out to meet the deadlines of numerous automation integration projects for customers in the injection molding industry. The Cambri... 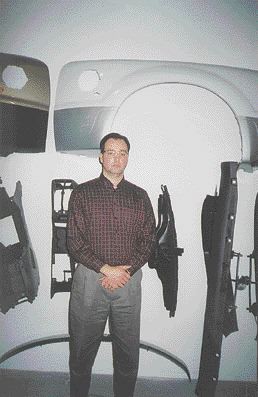 Three years after its founding, Sierra Automation Inc. is running flat out to meet the deadlines of numerous automation integration projects for customers in the injection molding industry. The Cambridge, ON-based company specializes in the design and manufacture of post molding equipment for operations such as de-gating, trimming, piercing, clip insertion, heat staking and ultra-sonic welding.

The company recently sold several piercing machines to a Tier 1 manufacturer of injection molded fascias. The machines are used to pierce two, 140 mm holes for an optional driving light package. Piercing the holes, rather than molding them into the fascia, provides the supplier with a dual benefit, according to Sierra Automation’s president, Martin Pemberton.

First, the operation reduces part inventory, which in turn allows the supplier to streamline system requirements for meeting the in-line vehicle sequencing schedule. When the assembly plant calls for a fascia with the driving light option, a finished part is placed into the piercing machine, punched, removed and shipped in the required sequence.

Pemberton reports that the company also received its first order for a robotic de-gating work cell. The robotic cell will de-gate and remove feather flash from a TPO fascia. The cell has two Fanuc robots for part placement and removal. According to Pemberton, the robots can be programmed to change cutter tools after a pre-determined number of cycles, without stopping the work cycle. The cell also automatically weighs the part for quality control.

The company’s mechanical designers design each work cell for a specific part using Solid Works software. The critical components of the de-gating cell, says Pemberton, are the part nest, the robotic programming and the end-of-arm-tooling. Design changes to the part, or the ability to run two different parts, can be accommodated by building another nest and re-programming the robot.

Pemberton, who worked for a large automotive supplier before founding Sierra, says the payback on the work cell is about one year. Interest in automated de-gating and trimming has peaked in recent years as manual trimming has become increasingly work-intensive and often leads to repetitive motion injuries.

“Sequential-valve gating has enabled molders to reduce cycle times tremendously, but it leaves you with a part that has many gates that need trimming,” says Pemberton. He says companies would rather re-deploy the skilled labor used for trimming operations into other, value-added work functions.

Sierra Automation operates out of a 4,500 sq. ft. facility and now has 11 employees. Currently most of the company’s customers are in the automotive industry. Pemberton says he has no qualms about branching into other markets, as long as its related to plastics.

“We are focused on the plastics industry. We understand the peculiarities of working with plastic products.”

The Finish company Conenor is licensing a new type of conical extrusion technology that permits processors to make multi-layer, multi-color products without the need for complex, expensive dies or side extruders. The technology is also said to improve the mechanical and physical properties of plastic compounds used to make pipe, film and packaging.

Spiral channels machined into the conical rotors and stator surfaces significantly lower polymer residence time, compared with single- and twin-screw units. In turn, this provides improved control of the shear rate and melt temperature, eliminates degradation of polymers and additives, and permits use of higher melt temperatures.

The conical extruders are said to be ideal for products made of difficult to extrude or reactive materials.