COVID-19 home testing kits: should we be worried about their environmental impact?

Many parts of the world classify testing kits as medical waste, and as such they need to be burnt in incinerators without any option for energy recovery. 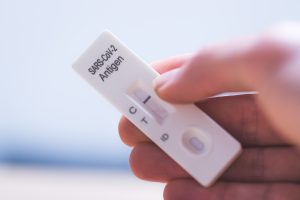 The highly transmissible omicron variant has led to renewed interest in home testing kits. The UK is getting through millions of these tests each week, while US president Joe Biden has just ordered 500 million kits to send to Americans.

Along with vaccinations and better medication, the availability of rapid testing has meant that many countries are in a much better place to combat the pandemic than they were a year ago. As with everything, though, testing has an environmental impact that warrants some investigation. So should we be worried about millions – or billions – of plastic test tubes and swabs?

This analysis is based on the lateral flow test known as the “Orient Gene Rapid Covid-19 (Antigen) Self-Test”. It’s a typical home testing kit in the UK, where I live, and is available through the NHS either online or in pharmacies.

I weighed each item in the lateral flow test kit (also known as lateral flow devices, or LFD) and found it overall contains 10 grams of non-recyclable plastics. The test kit itself weighs 4 grams; the rest of the weight is made up from the extraction tubes, caps, swabs and zip-lock bags to be used for disposal.

Plastic production emits lots of greenhouse gases, primarily carbon dioxide. Exactly how much depends on the type of material produced, but the sort of lighter and less durable plastic used in packaging and household products generally emits around 1.5 grams to 3.1 grams of CO₂ equivalent per gram of plastic. As such, I’ll use a rough figure of 2.25 grams in this analysis since I don’t know the exact composition of the plastics used in the kits. Using this figure, the production of each test kit emits 22.5 grams of CO₂e.

Weekly statistics from NHS Test and Trace in England from a period from the end of May till mid-November indicate that 1,742,654 people were being tested at least once per week. Assuming testing was done with similar kits then on a weekly basis we have 39 tonnes of CO₂e being emitted due to the use of these kits in England alone. And the new omicron variant has caused unprecedented demand for kits, causing shortages. Delivery of the kits is ramping up, so the estimated testing numbers will probably keep increasing.

Yet COVID-19 and greenhouse gas emissions aren’t a local problem, but a global one, and should be treated accordingly. Global data is difficult to find as not all countries are reporting usage of kits, but the world used at least 3,631,464,074 kits by December 15, bringing the total emissions to date to 81,708 tonnes of CO₂e. This would be the equivalent of the annual emissions of 17,000 average people.

Those 17,000 people represent just 0.0002% of the world population. The CO₂e numbers are therefore not big enough to make us worry, especially when compared to the much grander scale of the rest of our emissions. However they can serve as a good indication that everything we do has a climate impact and that the impacts of COVID-19 might be even more far reaching that we think.

This very basic analysis also doesn’t take into account the disposal of the waste from used kits, or the extensive use of sanitisers, or the litter created by masks and other personal protective equipment.

In the UK, home testing devices should be disposed of in the regular bin, which means the best option for minimising the environmental footprint is a waste to energy plant so that you can generate electricity from burning the rubbish. Many parts of the world classify testing kits as medical waste, though, and as such they need to be burnt in incinerators without any option for energy recovery.