A limited run of approximately 900 of the prototype bottles have been produced. 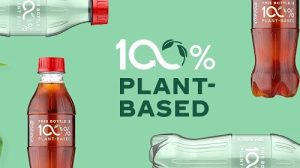 Beverage giant The Coca‑Cola Co. achieved what it’s calling a “major milestone” last month with the unveiling of its first-ever beverage bottle made from 100 plant plant-based plastic – excluding the cap and label – that’s been made using technologies that are ready for commercial scale.

“We have been working with technology partners for many years to develop the right technologies to create a bottle with 100 per cent plant-based content – aiming for the lowest possible carbon footprint – and it’s exciting that we have reached a point where these technologies exist and can be scaled by participants in the value chain,” said Nancy Quan, the company’s chief technical and innovation officer.

The original PlantBottle includes monoethylene glycol (MEG) from sugarcane, but the terephthalic acid (PTA) has been from oil-based sources until now. According to Coca-Cola, PlantBottle packaging looks, functions and recycles like traditional PET but has a lighter environmental footprint.

Coca-Cola’s new prototype plant-based bottle is made from plant-based paraxylene (bPX) – using a new process by Virent – which has been converted to plant-based terephthalic acid (bPTA). “As the first beverage packaging material resulting from bPX produced at demonstration scale, this new technology signals a step-change in the commercial viability of the biomaterial,” company officials said. “The bPX for this bottle was produced using sugar from corn, though the process lends itself to flexibility in feedstock.”

The second breakthrough technology, which Coca-Cola co-owns with Changchun Meihe Science & Technology, streamlines the plant-based MEG (bMEG) production process and also allows for flexibility in feedstock, meaning more types of renewable materials can be used. “Typically, bMEG is produced by converting sugarcane or corn into bioethanol as an intermediate, which is subsequently converted to bioethylene glycol,” Coca-Cola said. “Now, sugar sources can directly produce MEG, resulting in a simpler process.”

UPM, the technology’s first licensee, is currently building a full-scale commercial facility in Germany to convert certified, sustainably sourced hardwood feedstock taken from sawmill and other wood industry side-streams to bMEG. “This marks a significant milestone toward the commercialization of the technology,” Coca-Cola said.

“The inherent challenge with going through bioethanol is that you are competing with fuel,” said Dana Breed, Coca-Cola’s global R&D director, packaging and sustainability. “We needed a next-generation MEG solution that addressed this challenge, but also one that could use second generation feedstock like forestry waste or agricultural byproducts. Our goal for plant-based PET is to use surplus agricultural products to minimize carbon footprint, so the combination of technologies brought by the partners for commercialization is an ideal fit with this strategy.”