The federal government awarded $500,000 to the Canadian Plastic Industry Association, Quebec Region, (CPIA Quebec) to improve productivity and innovation among the plastics industry. The announcement ... 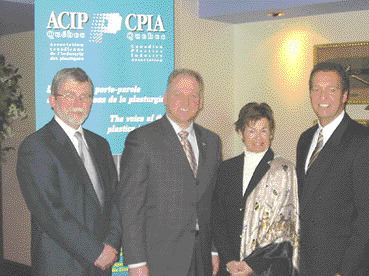 The federal government awarded $500,000 to the Canadian Plastic Industry Association, Quebec Region, (CPIA Quebec) to improve productivity and innovation among the plastics industry. The announcement was made Thursday, March 13th, in Quebec City, by the Secretary of State for Canada Economic Development Agency, Claude Drouin, in the presence of Odette Mercier, executive director of CPIA Quebec.

The money will be used to establish five regional plastics processing groups on productivity and innovation. Each group will consist of representatives from 10 to 12 small- and medium-size business plastics businesses from a given region. These participants will engage in a structured effort to boost productivity and innovation within their own companies with action plans. The program will also include an electronic platform called E-Plastik, for disseminating results on each company’s productivity enhancement projects and best industry practices.

The regional groups will provide companies with the chance to interact with specialists in innovation and productivity. Various activities and programs are planned to provide critical technical and managerial information needed to enhance knowledge and skill sets in these areas.

“There cannot be improved productivity without increased innovations. We are lagging behind the U.S. on the productivity side of our manufacturing equation by 38%,” Minister Drouin said at the ceremony. “It is critical for Canada to change this trend. This premiere project in Quebec for the plastic sector is intended to achieve that goal.”