Building from the ground up 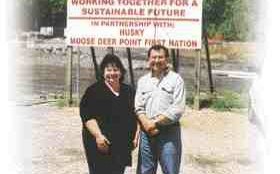 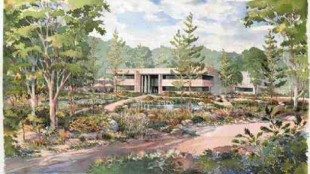 There’s a new landmark in this First Nation community located on Georgian Bay, in a pristine setting of water and rocks and trees reminiscent of a Group of Seven painting. It’s a modern, architecturally striking, 48,000 sq. ft. manufacturing facility, home to Niigon Technologies Ltd., Canada’s first aboriginal-owned custom injection molding operation. The building and company have both practical and symbolic meaning.

“We see this as a great opportunity to create a cornerstone of sustainable development within the community,” says Bob Dickson, Niigon general manager. Yet, with the official start-up slated for this autumn, Dickson is also quick to note that the employees and community are realistic about the challenges facing a start-up company that has yet to mold a single part. Training is underway and Dickson is travelling extensively to talk with potential customers.

The tangible, though incomplete, building rising from the ground today grew out of the relationship and discussions between Moose Deer Point First Nation Chief Edward Williams and Husky Injection Molding Systems Ltd.’s president Robert Schad, which began over five years ago. Moose Deer Point owns 619 acres of land, about a two-hour drive from Toronto. It is comprised of approximately 415 members. The community’s primary source of employment is the Moose Deer Point Marina, along with construction work, both of which are seasonal. Discussions between Schad, the Chief and other members of the community focused on the concept of bringing a more stable, self-sustaining enterprise to the area. Years of legwork, along with contributions from the Moose Deer Point community, The Robert Schad Foundation, and loans/grants from the federal and provincial governments, eventually turned Niigon into a reality. Cost of the building is $12 million, with another $13 million allotted for the purchase of equipment, training and other support functions. Ground was broken in May of 2000.

According to Dickson, the company intends to focus on molding small plastic parts, such as those used in assemblies for electronic and telecommunication products. It would also consider any high-volume, commodity-type business, such as closures. The company will purchase Husky Hylectric machines on an as-needed basis. Niigon has contracted Husky to provide technical support and maintenance on the machines for ten years. The plant will begin operation with one to three 90-ton Hylectric machines, and the business plan calls for ramping up to as many as 18 machines in the 90- to 300-ton range over the next four to five years.

Niigon has a partnership with Nypro, a U.S.-based molding firm. The company is providing Niigon with training and marketing services. Dickson says the arrangement may eventually lead to new business for both companies. Niigon is also exploring several other business opportunities in Canada, the U.S. and Europe. Dickson emphasizes that the company’s plan is to bring new business to the area, and not to compete directly with local molders. While the company does not yet have any formal business contracts, he is confident it will be molding parts when the plant is opened this fall.

“We are dealing with all the challenges that a start-up faces, but we also feel we can offer customers a number of advantages,” Dickson notes. “We have a stable, captive workforce, and the energy use in our building will be one-half of that in a conventionally-designed building.”

More than a company

Both the design of the building and the financial operations of the company have been structured around the concept of sustainability. The building is designed with many advanced environment-friendly features, such as all-natural lighting and ventilation, roof-mounted photovoltaic cells providing up to 42 kilowatts of power, waste energy recovery, radiant floor heating, storm water holding and treatment ponds and a leading-edge biofiltration wastewater treatment system. When in full operation, the plant will be emission-free. Fuel-cell technology or other sources of alternative energy such as turbine engines will be used in the future to meet to growing energy demand as the plant adds capacity and equipment.

Niigon, an Ojibwa term meaning “for the future”, is wholly owned by the Moose Deer Point First Nation. Company profits will be placed in a Trust called “Naadmaadying” and administered by the community. The Naadmaadying Board will identify uses for the money in the community, such as housing renovations, education upgrades, recycling programs and other projects.

Dickson singles out the extensive consultation with the community carried out by its leaders and business partners as one of the keys in getting the project off the ground.

“What the council tried to keep in mind during all the discussions about how to do this, was that there were people involved,” says Rhonda King, director of economic development. “The development had to be carried out in such a way that it did not disrupt the community.”

With employment among community members ranging from a high of 70 percent in the summer to a low of 30 percent in the winter, King believes the most significant impact of the company will be to give people options, as well as to encourage them to complete or improve their education.

“A lot of our young people used to move away for better opportunities,” says King. “As Niigon grows we anticipate that year-round employment will keep people here, and that more from outside the community will move here.”

Current plans are to begin operating with six employees and eventually to expand to 60 to 70 people by the end of the fourth year in business. In the near term, the focus has been on training and interviewing potential employees. King says a group of eight people have already completed training for injection molding setup technician, as well as basic plastics processing, at Humber College’s Canadian Plastics Training Centre. Two of the trainees completed the course with honors. Another group of people is receiving on-the-job training at Husky Injection Molding System’s facility in Bolton, ON.

Dickson says the company will use Georgian College in Barrie, ON for “soft skills” training, such as team awareness and basic manufacturing-related knowledge and abilities. Once the plant is operating, all training will be on-site.

“Training is one of the most critical aspects of the start-up,” notes Dickson. “There are a lot of myths about aboriginal workers. Our trainees have shown they are quick to learn and highly motivated.”

“The government is looking for ways to encourage aboriginal companies to enter the new economy and knowledge industry, and Niigon is a good example of this,” says Spanton. “There are many, many more aboriginal businesses starting up today and these companies are looking to export and grow in world markets.”

One of the company’s core marketing strategies will be to partner with suppliers and customers that have strong environmental and/or community-based business policies in place. Still, says Dickson, the bottom line is to become a profitable company as quickly as possible.

“We want to prove we can stand on our own two feet and compete in the open market.” CPL