Called the Nexe pod, the pods compost completely in as little as 35 days in industrial compost. 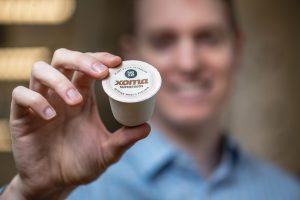 Coffee is supposed to help you unwind, not make you feel even more stressed. So if you’re concerned about your single-use coffee pods ending up as pollution, you can now relax a bit over your morning cup, thanks to a new fully compostable coffee pod created by a University of British Columbia (UBC) scientist and Surrey, B.C.-based Nexe Innovations Inc.

Called the Nexe pod, the pods compost completely in as little as 35 days in industrial compost, and are the result of a three-year collaboration between UBC’s Dr. Zac Hudson, an assistant professor and Canada Research Chair in Sustainable Chemistry, and Nexe Innovations, which is a leader in plant-based materials manufacturing.

The problem to be fixed was that many compostable pods already on the market are soft-bottomed, exposing the coffee grounds to moisture and air and allowing them to go stale quickly; and they also hold fewer coffee grounds than plastic pods, which makes for a relatively weak brew. But the downside of pods made from traditional plastic is that they don’t decompose in landfills. So in order to create a fully compostable pod, the team needed a bioplastic – and, as it turned out, had to formulate a new one. “We started out by importing bioplastics from overseas and trying them out for the pods we wanted to create,” Hudson said. “This helped us learn which materials worked well and which didn’t, so we could create new formulations in-house or with the help of our partners.”

The team eventually settled on a two-part solution made from two specially engineered components: a bioplastic inner capsule made from polylactic acid (PLA) compounded with other natural ingredients that addresses moisture, air, and heat issues and holds a large volume of coffee grounds; and an outer jacket made from bamboo that still looks and feels like plant fibre.

The new bioplastic was tested in collaboration with Hudson’s research group at UBC, while the composting of the pods was tested at the Surrey Biofuels Facility. “We’re now making our own bioplastics at our facility in Surrey and are looking to bring significant bioplastics manufacturing capacity to Canada,” Hudson said. “We’re also working on home composting solutions for our pods.”

The pods are compatible with all Keurig K-Cup brewing systems and were launched commercially in January under Nexe Innovation’s Xoma Superfoods brand – and sold out their entire launch inventory through their online store in one day. The company recently announced Nespresso-compatible pods set to begin production later in 2021.

Which means that, in future, if your coffee makes you feeling jittery, don’t worry – it’s the caffeine, not any guilt about plastic waste in the environment.