Purdue University researchers are working to use a new polymer film, which could make smartphones more bendable, to create tailor-made sensors that could non-invasively monitor glucose levels, heart rate or other biomedical metrics.

An expression in the comedy world says that if it bends it’s funny, if it breaks it’s not. To modify it slightly, a glass-like, conductive polymer under development at Purdue University that can make smartphones and other electronics more bendable is a fun innovation, but its potential use in healthcare applications that could help save lives is very serious indeed.

Researchers at Purdue, which is located in West Lafayette, Ind., have designed the polymer to conduct electricity for transparent and flexible electronics. Purdue’s polymer is made from long chains that contain radical groups, which are molecules that have at least one unpaired electron. “The radical polymer has a fundamentally different chemistry and mechanism for creating conductive plastics,” said Brett Savoie, an assistant professor of chemical engineering at Purdue who served as a senior member of the research team. “We are able to coat the film, which stays transparent at relatively large thicknesses, and make uniform films without defects.” 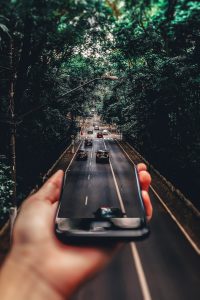 The polymer film, which is said to have the look and feel of glass, can be inexpensively and sustainably produced on a large scale because it comes from “earth-abundant materials,” Savoie said. “Now, you have something you can sell, especially for high-end electronics,” he continued. “We have made a giant leap in polymer production by better matching the mechanical properties of organic materials used to create them and helping to avoid catastrophic failures with electronic display screens.”

The material is cost-effective compared with currently used polymers in electronics that rely on expensive chemistry and chemical doping to achieve high conductivity, Savoie said, and much less expensive than indium tin oxide, which is the current standard material in displays. “And it’s competitive with other organic plastics and is orders of magnitude better than the next-best radical polymer,” he added.

The new polymer is also central to a research project currently underway at the Purdue-based Materials Innovation for Bioelectronics from intrinsically stretchable Organics (Mi-Bio) centre. Researchers there are using the polymer film to create custom sensors that could non-invasively monitor glucose levels, heart rates, and other biomedical metrics. The film could be modified, using specific molecules or ions, to target and selectively interact with various biological components inside the body, Savoie said, and could be worn as a nearly invisible patch on the skin.

And there’s nothing funny about this potential breakthrough.