The former Balcan Plastics, a well-established Quebec-based flexible packaging and film supplier, has changed a lot over the past year. Which is why it’s also been renamed. 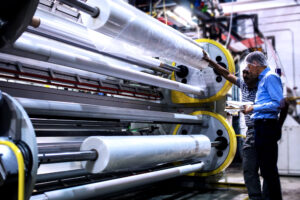 Sometimes a name change doesn’t mean much – early Canadian smartphone maker Research In Motion’s rebranding as BlackBerry in 2013 didn’t really alter the product line all that much. Other times, however, it can tell you a lot.

When Canadian film extruder Balcan Plastics Ltd. changed its name recently to Balcan Innovations Inc., it capped a series of moves over the past year that have marked an unprecedented growth phase for the 55-year-old company, which traditionally made plastic packaging and film for industrial applications, from building materials and wood products to lawn and garden and food and beverage.

All told, then, it’s not quite the same Balcan you might remember from just a few short years ago. “We’ve been very active over the past two years, and as we look forward, we see a future that requires us to be much more innovative than our competitors, and also much more innovative than where we’ve been, historically,” said Balcan CEO Dano Lister. “The name change from Balcan Plastics to Balcan Innovations represents this aspiration.”

Balcan was founded in 1967 as a family-owned company with a single extruder and the classically entrepreneurial idea of filling a void in a particular product sector: in this case, making films and flexible packaging for Montreal’s growing garment industry. In the 1970s, Balcan Packaging opened its first plant in St-Leonard, Que., a suburb of Montreal, and became one of the first companies in North America to commercialize large web film of up to 40 feet; and a second plant opened in St-Leonard, across the street from the first, just a few years later, increasing the company’s manufacturing and warehousing footprint by more than 400 per cent. By the mid-1980s, Balcan Packaging had become an early adopter of three-layer blown film, and in the 1990s, it developed elastomeric film technology and launched its proprietary stretch hood film – a first-of-its-kind in North America. A third plant opened in Laval, Que., in the early 2000s. “Balcan Packaging’s founders identified an opportunity and built a tremendous company around that over the past 55 years,” Lister said. “The mission was always to develop and deliver sustainable, high-quality film and flexible packaging that protects and promotes the customers’ products.”

And that hasn’t changed, Lister continued. “We have a strong product development organization that’s very adept at customizing films to meets customers’ needs – in particular, customers who are using those films in demanding downstream applications, either automated filling or packaging lines or converting lines that require consistency,” he said. “Across our plants, we control every step of our R&D, manufacturing, warehousing, and distribution processes in-house, and incorporate redundant fabrication capabilities for control and efficiencies. The vertically integrated operations enable us to offer consistent, high-quality products at competitive prices.”

What has changed is that offering plastic packaging and film is no longer all that Balcan does. First, as a company, Balcan Packaging no longer exists. “The assets and customers of the old Balcan Plastics are still there, and we still use the brand name for our custom film and flexible packaging products, but it’s now become the plastics division of Balcan Innovations,” Lister said. Second, some of the recently acquired companies have products that overlap with Balcan’s plastic packaging operations, while others don’t. “With our Nelmar security packaging operations, there’s really no end product overlap,” Lister said. “With Plastics FFS, there’s direct overlap: Balcan Packaging had historically served the same type of customers as Plastics FFS, and going forward there’s some good integration opportunities for us in bringing these two businesses together to help refine our focus around that particular type of packaging, which is primarily more towards the industrial space and automated filling operations, which has very precise requirements.”

Balcan’s plastics packaging operation, meanwhile, is still growing on its own. In February, the company announced the installation of a new three-layer Windmöller & Hölscher (W&H) extrusion line in St-Leonard. The line is now fully operational, and joins a large fleet of extrusion machinery in the St-Leonard and Laval facilities. The company has been buying from W&H for a number of years now. “We have W&H lines in our facilities that date back at least 10 years,” Lister said. “As we’ve developed a need for films with higher technical consistency and consistently high output, and the ability to control thickness and quality of film on the output, we saw W&H as being a partner that really delivers those enhanced efficiencies and outputs – they’re a leader in this space. Our newest line will help us grow our output capacity and stay ahead of demand for high-performance films.”

And Balcan Innovations’ new 165,000-square-foot facility in Wisconsin – which was special-built, Lister said, towards the requirements of higher end film production and printing – was purchased in June 2021 to support the evolving needs and growth of the company’s American customers. Following a six-month sprint filled with extensive facility construction and rehabilitation, and investments in new machinery, the state-of-the-art plant is now operational, but still a bit of a work in progress: Within the coming year, it will fill out its growing fleet of three- and five-layer extruders, along with a series printing presses, converting equipment, warehousing space, and loading access via truck and rail. “We’ve supplied the U.S. market for a long time, and we have some great blue-chip customers there and we also see the potential to develop new accounts,” Lister said. “Wisconsin is a business-friendly hub state, and state leaders provided a supportive package to us to help us locate there. We’re in a robust industrial park in Pleasant Prairie, with great manufacturers in the area, very good infrastructure, close to the freeways, and we’re along the railway to receive raw material.”

ADAPTING TO THE PRESENT

You might have noticed that Balcan’s growth spurt coincided with the worst global pandemic in over a century. But that didn’t slow the company down much, if at all. “We worked hard to maintain safe, healthy operations during the pandemic – we moved everybody outside of our manufacturing operations who didn’t have to be there – with the result that we never had a service interruption during the whole time.” Automation helped the firm stay productive during the crisis, Lister added, and it will probably play a bigger role going forward. In total, Balcan Innovations employs approximately 1,600 workers, with about 1,200 of those in the company’s plastics packaging segments. “Automation is very important, especially as labour gets scarcer,” Lister said. “The only way for us to continue to grow is to have robust operations, which means more automation, and we’re continuing to invest in that.”

The company also takes sustainability seriously. “Our packaging’s products are made from 100 per cent recyclable plastic, and our multi-layer extrusion and lamination capabilities also enable us to produce high strength, recyclable structures with thinner gauge, tight profile variations, and perfect film flatness, offering opportunities for downgauging and subsequent material savings,” Lister said. Also, Balcan has developed a series of products that incorporate post-consumer and post-industrial resins into its plastic film blends. “From industrial packaging and roll stock to shrink hood and shrink bundling film, the level of recycled content can be tailored from 20 to 100 per cent recycled content, depending on the health, safety and performance guidelines,” Lister said. “We also offer products made from renewable biological resources, such as biomass or food waste instead of the conventional fossil resources. With both recycled and renewable materials, we’re pushing the envelope as far as we can.”

After decades of slow, steady growth, Balcan has suddenly leapt forward exponentially in the past two years. But Lister believes there’s a “standing-on-the-shoulders-of-giants” quality to its recent growth. “We’re an entrepreneurial story,” he said. “Our roots are in a family that saw a need in the market and filled it, and we’re proud of that and still doing that today.”