A new generation of made-in-Canada compostable straws is about as sustainable as you can get. 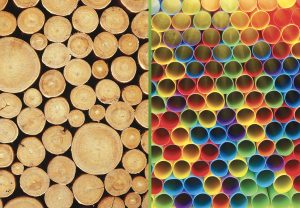 The old adage about the best defense being a good offense has probably never felt more real than for traditional plastic straw manufacturers right now, with single-use plastic straw bans becoming ubiquitous – including here in Canada, where the federal government plans to ban them this year. For Brantford, Ont.-based Stone Straw Ltd. – whose namesake founder patented the artificial drinking straw way back in 1888, and which currently is North America’s largest independent dedicated straw manufacturer – the defense began almost two years ago, with the launch of its first version of “Back to Earth” straws made with compostable biopolymers.

Fast forward to today, and Stone Straw is set to introduce a new, even more compostable generation of the Back to Earth straws made from an updated cellulose acetate formula based on two very basic building blocks: wood fibre and vinegar. “The biopolymer for our 2.0 version straws is supplied by Eastman Chemical Co., and is derived from wood pulp, or cellulose, grown in responsibly managed forests; and acetate from acetic acid, which is vinegar,” said Abe Looy, regional operations manager at Stone Straw and its parent company Wentworth Technologies. “Cellulose acetate is probably most commonly used in pharmaceutical as a semi-permeable membrane for control release tablets, and it’s extremely degradable.”

According to Looy, the first generation of Back to Earth straws was made from a proprietary, functionalized variation of standard PLA, which required customization of Stone Straw’s extrusion machinery – and the 2.0 version straws required modifications on top of those modifications. “Heating plastic to 200°C or 400°F and then cooling it to 25°C or 80°F is the typical, traditional way to extrude profile polypropylene [PP] straws,” he said. “We had to reverse that to extrude this new straw: it comes out in a hot molten state and then enters a water bath heated between 40° to 60°C or 100° to 140°F, which gives it time to relax and bind together, followed by a rapid cooling from a finely controlled absolute air ring. And because it’s a far more sensitive, unforgiving material than traditional PP in a molten state, we had to learn to float the straw in the water bath so that nothing touches it, because anything that does touch it leaves a line. Finally, the cutting has to be very precise.”

It may behave like a hothouse flower during production but, once it has cooled down, the final product is just as tough and durable as PP straws. “Post-production, our new straws can be printed and wrapped in the typical fashion as we would with PP straws, and we’ve had enough learning that we can now compete with typical production speeds for PP straws,” Looy said. And for the consumer, it will behave like a typical plastic straw, and not like a paper straw that turns soggy in a liquid. “Chemically, the straw is similar to a piece of wood – which means that it absorbs moisture – and it becomes supple in a drink and will feel like any PP straw,” Looy continued. But it’s actually clearer than a traditional plastic straw. “We made the necessary drawdowns so the straws are glass-clear, with no opaqueness at all,” Looy said.

And after use, the straws are industrially compostable in a commercial composting facility and backyard compostable in a traditional home compost. It will also degrade in soil, water, and marine environments, meeting ASTM D6400 and ASTM D-6691 standards. “On top of that, if the new earth-friendly straws end up in an active landfill, they will degrade and contribute to the production of natural gas, which in turn is used for energy in heating our homes,” Looy said. “This achieves our government’s zero plastic waste and circular economy goals.”

Having spent almost a year – during a global pandemic, no less – developing the straws, Looy believes that most of Stone Straw’s heavy lifting on the project has now been done. “Unlike PP, this material isn’t easy to work with, and it took a lot of trial and error – including product trials conducted virtually, with cameras pointing at the extruders – to develop the right material formulation and processing method,” he said. “Everything has to be perfect, but if it was easy, everyone would be doing it, and it’s made us better extruders.”

Stone Straw has made sample products and sent them to its current customers, project partner Eastman has guaranteed material for future production, and the new straws are scheduled to be launched late this spring in 5.5- and 7.0-millimetre diameters. “We went back to basics for our 2.0 version of Back to Earth straws and made a product that acts, essentially, like a very thin piece of wood and then returns to nature,” Looy said. “It’s a made-in-Canada product that we’re very proud of.”