Hot runners can improve part quality, enhance operational efficiencies, reduce scrap, and save money. But they're complex and not exactly low maintenance. The good news is, you can overcome these challenges by addressing a few key issues. 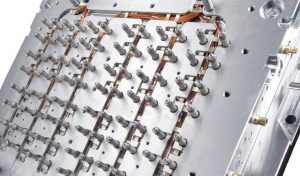 Few things in life are total win-win situations. Even winning the lottery can complicate your life as new “friends” and long-lost family members come out of the woodwork to help share in your good fortune.

Hot runners are another case in point. A known technology for more than 50 years, with commercial systems being available for more than 40 years, hot runner systems have undeniable advantages, including faster cycle times, balanced melt flow, the ability to sequence the gates, and the elimination of wasteful runners that can be up to half the total shot weight.

On the other hand, it’s hard to deny that hot runners also add a layer of complexity that may seem daunting, especially to processors that cut their teeth on simpler cold runner systems. But it doesn’t have to be this way. By following a few simple rules, keeping their eyes open for some common problems, and following a preventative maintenance schedule, processors can avoid the downsides and reap the benefits of optimal part quality.

START AT THE BEGINNING

Hot runner problems can begin at the beginning if proper procedures aren’t followed. “A processor has to follow the appropriate start-up procedure recommended for a specific hot runner system with consideration of the material being used,” said Brian Finkel, U.S. service and repair manager for Mold-Masters’ MasterCARE service centre. Part of a good start-up, Finkel continued, involves soak time. “This is required to allow the system to heat and expand, which is important for two reasons: thermal load through the system and the reheating of the material in the melt channels,” he said. Knowing the material and the hot runner system allows the processor to determine what the soak time requirements are for each mold. “Heat-sensitive materials may degrade if left to sit at a normal processing setpoint for an extended period of time,” Finkel said. “On the other hand, an insufficient soak time may not allow hot runner components to properly seal — resulting in leakage — or in the material not being ready to be injected, which can damage the components.”

This is an area where mistakes can occur, and they can be costly. “Just because the manifold reaches the right temperature doesn’t mean it’s fully expanded, but processors don’t always want to wait the additional 15-20 minutes it takes for full expansion,” said Steve Johnson, president of MoldTrax Maintenance Solutions. “Without full expansion on the components, a small leak can be created, and this turns into a larger leak that slowly encapsulates the entire manifold and related wiring. Removing this plastic shell is time-consuming and expensive, and there’s a limited choice of cleaning methods available.” 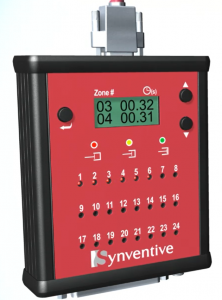 Synventive’s SVG+ hot runner system is designed to save time by providing monitoring and diagnostic tools from outside of the molding machine. Photo Credit: Synventive Molding Solutions

And on the subject of hot runner control, the SVG+ hot runner system from Synventive Molding Solutions is designed to save time by providing monitoring and diagnostic tools from outside of the molding machine, resulting in less downtime, less scrap, and increased reliability. “The SVG+ systems are equipped with a new modular actuator design and SynCool3 technology, which provides cooling of the actuators without the need for separate cooling lines,” said Bill Rousseau, Synventive’s director of applications and technical services. “These systems are delivered ready to connect to a valve monitoring interface — or VMI — for monitoring, diagnostics, and troubleshooting from outside the molding machine. VMI provides measured individual pin movement data and allows operators to check whether the valve pins are moving as intended.”

Once the hot runner system is up and running, processors can also be plagued by leaks from a different source: a process temperature that exceeds the levels for which the system was designed. This is actually the root cause of the vast majority of material leaks, the hot runner suppliers say, and occurs when excessive thermal expansion exerts pressure on the system, causing components to shift position and create room for a leak.

It’s also important to ensure the appropriate mold cooling is active anytime the hot runner system has heat in it, even during shutdown. “Residual heat can damage components like actuator seals and O-rings and reduce their effective lifespan, which leads to more frequent maintenance and/or downtime,” Brian Finkel said. “If these are allowed to get to a point of failure, either by premature wear or excessive heat, they’ll leak air or the hydraulic oil used to actuate the valve pins.” To ensure proper cooling of all areas of a mold, the processor should have a water circuit for each individual cavity. “I’ve seen many systems over the years where a single water circuit was feeding water jumpers to cool multiple cavities, and the results usually aren’t good,” Steve Johnson said.

THE TROUBLE WITH THERMOCOUPLES

Overshooting setpoints can be a hot runner problem, and is one of the most commonly misdiagnosed because the root cause isn’t always clear. “Too often the wrong components are replaced blindly in hopes of solving the issue, when in fact thermocouples are the most common culprit,” Bill Rousseau said. “The chief cause of a problem with a thermocouple is wires becoming pinched if they’re trapped between mold plates or part of the hot runner and a mold plate during assembly.”

A variation of an overshooting zone issue is when one zone is overshooting while another zone is lagging behind. “This is typically caused when the thermocouples and heaters of two zones have been swapped so that the thermocouple of one zone is controlling the heater of the other and vice versa,” Rousseau said. “This is usually the result of a wiring mistake in the hot runner itself, but it can also be caused by bad cables.”

A bad thermocouple can also result in zones not reaching setpoint, although a failed heater or a cable/connector issue might also be the culprit. “For this problem, check the easiest things first,” Rousseau said. “Inspect the connector pins in the controller for any that are bent or have pushed into the connector, breaking the electrical circuit; check for continuity of the heater zones; and do a visual inspection for plastic leakage or signs of a water leak. If none of these are the cause, replace the thermocouple.”

Along with the additional layer of complexity, hot runners create increased residence time for the molten plastic, which can lead to material burning in the hot runner system, especially with polymers that are time/temperature sensitive. “The higher the temperature, the less time until degradation begins,” Rousseau said. “However, even time spent at lower temperatures adds to the heat history of the material and can contribute to degradation down the road.”

YOU PAY FOR WHAT YOU GET

With more than 40 hot runner systems manufacturers operating today, it’s safe to say that not all systems are created equal. “In addition to built-in wiring problems, poor watt-to-mass ratio could cause hard to solve issues for the processor,” said Tim Bruin, customer service manager of North America for HRSflow-INglass USA Inc. “Also, some manufacturers use cheaper steels for making manifolds, and some don’t have a thorough understanding of the application of the mold or the part being produced.” But this is a problem you can avoid by selecting an experienced, reputable hot runner supplier and building a good relationship with them. “You always get what you pay for, and processors looking to buy hot runners have lots of choices and should consider these aspects,” Bruin said.

What every hot runner brand, good or bad, has in common is the need for preventative maintenance. The challenge? It’s tedious work that requires focus, patience, and a deft hand when removing and handling tooling. “It takes discipline to stop and investigate if you feel excessive resistance when removing or installing valve pins, heaters, manifolds, and related tooling,” Steve Johnson said. “Applying the wrong amount of force can lead to catastrophic results, so knowing what excessive resistance feels like is a crucial skill that separates an apprentice from a journeyman.” But it’s worth it: Hot runner maintenance can save up to 40 per cent compared to the cost of a new hot runner system, the suppliers say.

As a general rule, the less hot runner systems are taken apart and the seals are broken, the better. Most hot runner suppliers recommend maintenance on the system once every six months, involving everything from heater resistance and connectivity checks and replacement; to disassembling and cleaning valve gates; to inspecting and verifying tooling conditions; and to removing, cleaning, and reinstalling fixed gate tips. And since thermocouple failure is unpredictable, some hot runner suppliers recommend replacing the old with the new when performing maintenance on the hot runner system.

But whatever you do, don’t dive blindly into a manifold teardown unless you’ve been trained to perform maintenance on that particular brand of hot runner system. If you haven’t, contact the hot runner manufacturer’s service department and ask them to walk you through the procedure. “Many of the technicians in today’s shops lack exposure to hot runners — they’ve never seen what a manifold looks like and don’t really understand how it works,” Tim Bruin said. “Training from the hot runner supplier is key because it gives you an understanding of the system — you’ll be able to visualize the material in the manifold — and of the importance of documenting the maintenance process.” This last step is hard to overemphasize. “Every manifold has its own quirks and procedures or sequence of events, and these should be documented in the maintenance manual and followed diligently by all repair technicians,” said Steve Johnson.

Since working on hot runner manifolds and components is such a delicate job, some shops might be reluctant to undertake their own in-house manifold maintenance and repair. For these, many hot runner suppliers offer maintenance and refurbishment programs. “Husky’s refurbishment process includes both major and minor hot runner maintenance items,” said Chris Rocheleau. “We can get rid of contamination in the melt stream, and use a scope to make sure there are no restrictions in the melt flow. In some cases we don’t refurbish the whole system, perhaps only the manifold or tip assembly, although if the customer wants it restored to new we can do that too.”

Although there will be an ongoing need for cold runner molds, the advantages of using hot runner systems are so great that they will increasingly be the runner technology of choice for molds used in molding thermoplastics. Which is why mastering the nuances of processing with hot runners might just be one of life’s genuine win-wins.