Automotive: the future is here

The 2002 SAE World Congress for automotive engineers featured a strong Canadian presence, upbeat suppliers, processors looking for new business and the first ever Digital Car Conference. The show offered evidence of how close industry is to manufacturing vehicles with new technologies that would have been unthinkable only a few years ago, in the process serving up new challenges and opportunities to plastic processors. 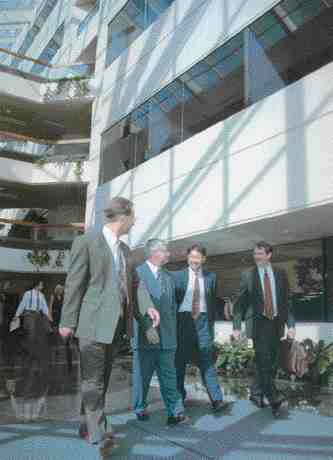 While some of the largest automotive suppliers have stopped exhibiting at the SAE show in recent years, the show continues to be a draw for top automotive engineers interested in the technical program and display of new technology from around the globe.

Rumors about the lagging interest in the annual geek-fest known as the Society of Automotive Engineers show are unfounded. True, participation by the largest automotive suppliers has dropped off in recent years. Among the top 50 auto suppliers, only two, American Axle Manufacturing and Denso Corp., purchased exhibit space at this year’s show. These large companies say cost pressures are the reason they have dropped the show. However their absence went hardly noticed, as smaller companies, many of who are by no means “small”, as well as numerous foreign firms, seemed to be ably engaging the attention of the approximately 44,000 people in attendance.

Setting this SAE show apart from previous ones was the fact that many of the so-called futuristic technologies on display and under discussion — fuel cells, hybrid cars, digital operations — were already commercial or near-commercial. As well, there was plenty of news from the show floor as exhibitors and suppliers were eager to promote their capabilities in a market that has rebounded and compelled analysts to revise North American car and truck sales forecasts upward.

The first Digital Car Conference and Exhibition was held at this year’s show, centered on the theme, “Telematics — what do people really want”. Telematics is the use of wireless communications in vehicles to help drivers navigate, avoid accidents, send e-mails or place orders for baseball tickets or other products and services from the road. The digital car conference included 35 discussion sessions on topics covering technological advances, standards and other issues related to telematics.

Use of telematic-based services, such as General Motors’ OnStar program, have until now mostly been limited to the luxury car market. Nonetheless, the growth in the variety of future telematic services, and continued reduction of costs, is expected to lead to broader acceptance and demand for telematics. According to one estimate, the telematics industry is predicted to surpass 11 million customers and $1.7 billion in sales by 2004. Minnesota-based Telematics Research Group predicts that by 2006, 33% of all autos will have telematic systems.

One discussion focused on whether the OEMs or suppliers will play the lead in the development of this technology, noting that for years it has been the Tier 1 companies that have led electronic technology advances in vehicles. With telematics, however, the trend appears to be reversed. For example, Ford Motors has partnered directly with Qualcomm Inc. to launch Wingcast, a service to put voice activation, entertainment, Internet access and safety services into cars and trucks.

As this technology evolves, a role for plastics processors, especially in the development of interior telematic and entertainment modules, seems assured, according to several industry observers. On the service and software side, there is already a strong Canadian presence in this area, as six companies in Canada participated in the show’s Digital Car Exhibit (see list top left).

With the on-going growth of electrical power demand in motor vehicles, the conventional 14V battery and power distribution system will soon go the way of the horse and buggy. The SAE and other groups are working to coordinate the development of a new electrical power system, 42V technology. A group of experts met during the show to discuss global harmonization of 42V interface and performance standards and address technology concerns.

The 42V technology is being developed in accordance with the ISO 21848 standard. The standard, which is itself being finalized, describes the potential stress requirements and necessary testing. A draft version of the standard is expected by the end of 2002.

The United States Council for Automotive Research has taken on the job of overseeing and advancing activities to address the fundamental technological challenges of the 42V conversion. USCAR is channeling its efforts through four sub-groups — battery terminal, jump-start, arcing and regulations — staffed with participants from the all North American automotive OEMs.

About 90% of DynaPlas’ sales are in automotive. The company molds a variety of small parts, such as pulleys, bobbins and connectors. Barshaw says the company’s niche specialty in precision molding largely protected it during the recent downturn, noting that the company is busy launching new programs for 2003 models.

“We’re not a shoot-and-ship company,” Barshaw says, reporting that the company has considerable in-house design expertise. “The next step for us is to become certified for black-box design.”

Dynaplas has about 40 injection machines, the newest being a 30-ton all-electric. The majority of the company’s machines are all-electric. “You can’t hold the tight tolerances on the types of parts we make with hydraulic machines,” says Barshaw.

Injectech Industries completed a 40,000 sq. ft. expansion to its facilities in Barrie, ON this January, says James Aldworth, program manager. With the plastics operation in Romeo, MI it purchased in December of 2000, Injectech now has a total of three plants. The expansion has occurred on the coattails of major new automotive business the company has picked up over the past few years, including a contract to mold seating components for the General Motors Epsilon program. The program includes the Grand Am, Malibu and Saturn models. Injectech molds and supplies back panels, side shields, handles and other components to Faurecia, a Michigan based Tier 1 specializing in interior systems. The company is buying a 1200-ton injection molding machine to meet the capacity demands of the program, according to Aldworth. This is in addition to the six all-electric machines (three Nisseis and three Milacrons) it has recently purchased.

With a total of ten North American plants, including two in Mexico, and $350 million in sales last year, United Plastics Group, Inc. is looking to increase the fraction of its automotive business, which currently stands at about 15%.

“We’d like to get it up in the range of 20% or so,” says Jim Raptis, business development manager. UPG was sold by SPM Dynacast last year. Raptis says UPG has picked up a good deal of work from smaller companies that have gone out of business during the recession. He says the company’s core molding strengths include small, precision molded parts, such as gears, insert molding, in-mold decoration, instrument panel components and HVAC bezels.

“We’re at this show to get the word out. A lot of our competitors aren’t here, so we’re trying to make the most of it.”

The sentiment, no doubt, of many other exhibitors at the show wh
o had invested valuable time and money with the hope of catching the attention of the world’s top automotive engineers.

EYE CANDY FOR THE AUTOMOTIVE ENGINEER

Although presently not on any production vehicle, Stanley Electric’s new appearance rear lamp lenses were attracting much attention at the SAE show. The lamps on display included “spiral” and “compound eye” styles. According to a company spokesman at the booth, the lamps are injection molded in molds that are made by a patented CNC-based technology in Japan. The spokesman said a number of OEMs have expressed interest in the lamps as means of branding future vehicle models. Stanley now has a sales office in Novi, MI.

Textron says it has aggressively assimilated a new tool-steel technology that greatly increases the efficiency of injection molding. The company has replaced P20 steel with Brush Wellman’s copper-nickel-tin alloy moldMax XL in the manufacture of the central core of molds used to make instrument panels supports and other parts. Textron says the increased cooling rate of moldMax has reduced cycle time by 28% and, in the case of the tool used to mold the IP support panel, will generate savings of approximately $525,000 over the life of the tool.