New additives lines for products in the construction, packaging and automotive markets often enhance more than one property, for example UV stability and impact modification, increasing efficiency and reducing costs. 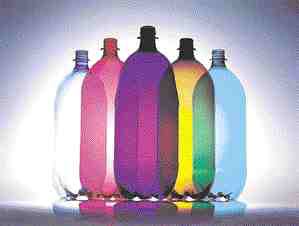 Milliken Chemical has introduced a line of liquid colorants, ClearTint, that can be used to color PET beverage bottles in a broad spectrum of colors.

Today’s additives technology continues to evolve to meet growing demands in the marketplace for better value and higher quality, as well as processors’ needs for greater efficiency and lower costs.

Nyco, a company which has played a pioneering role in the production and application of high aspect ratio wollastonite, is introducing Nyglos 4, a grade designed to meet the demanding performance requirements of automotive engineering alloys. The grade has been found to improve dimensional stability, flexural strength and torsional creep properties required for vertical body panels and other high-end applications. Nyglos 4 is E-coat compatible, meeting all painting-line requirements, and provides a surface appearance comparable to painted steel while lowering the coefficient of linear expansion.

Toronto-based Hedman Resources Limited has recently enhanced the marketing and distribution arrangements for its unique magnesium silicate industrial filler, Superfil 325. Under a new agreement, the industrial products group of CGC, a manufacturer and distributor of gypsum wallboard products, is offering Superfil 325 to its customer base, and is planning to launch finer grades of Superfil as a high-grade addition to its current line of gypsum-based mineral fillers. Non-asbestos Superfil has a MOH Scale rating of 2.5 and is not abrasive to processing equipment, making it ideal for use in gaskets, specialty rubber and elastomers, coatings and building materials.

The benefits of Degussa Corporation’s Dynasylan line of silanes for the wire and cable industries are outlined in a new 16-page brouchure. Used as crosslinkers and adhesion promoters for low- and medium-voltage cables, halogen-free flame-retardant cables and flexible cables, Dynasylan silanes can increase the thermal stability of polyethylene, as well as enhance flame retardancy and chemical resistance.

AIDS FOR EVERYTHING FROM PVC TO PC

Rohm and Hass has introduced a new high-efficiency, all-acrylic impact modifier that provides improved processability at high output rates. Paraloid KM-348 is said to match the performance of CPE or other acrylic impact modifiers, even when used at levels as much as 20% lower than these additives. Based on proprietary core-shell polymerization, Paraloid KM-348 is targeted for vinyl siding, window and fence profiles.

“With Paraloid KM-348, you can run at a higher output without ‘redlining’ your extruder motor load,” says Gene Szamborski, Rohm and Haas technical sales manager.

Millenium Chemical’s new Tiona 696 is the first titanium dioxide pigment to combine the durability of silica-encapsulated products with the superior performance of zirconia-stabilized products, according to the company. Tiona 696 has been specifically designed by Millenium to give the highest possible optical performance (opacity, gloss retention and color retention) with maximum exterior durability. Typical applications for the surface-treated pigment include PVC window and door profiles, siding, decking, fencing, piping and agricultural film.

Atofina Chemicals, Inc. is calling its new Durastrength 400 series of acrylic-based modifiers a breakthrough in the impact modification of engineering resins. According to Atofina’s Claude Gravel, the materials are based on a patented technology in which a rubber particle is encapsulated by an acrylic shell. The 400 series is being targeted at polycarbonate and PBT. At this year’s Additives 2002 conference (organized by Executive Conference Management), Gravel presented test results which show that 5% loadings of the additive in PC and PBT provides better thermal stability, good UV stability and lower notched Izod temperatures than conventional impact modifiers, such as MBS. Cost of the Durastrength 400 product is presently 20 to 25% higher than MBS, but Gravel says that in addition to better performance, the product can be used at lower loadings and eliminate the use of UV stabilizers, thus recovering the additional cost.

Ampacet claims to have addressed the deficiencies of existing migrating slips and anti-stats with two new products. Product 101501 is recommended for multilayer films where a differential coefficient of friction is desired, as the additive is non-migratory. The product has no adverse affect on sealing and is acceptable for food contact applications. The product can also be used at higher temperatures than conventional slips.

Product 101710 is recommended for use in multilayer lines where preferential functionality is required — e.g. antistat performance on inner layer and slip or antiblock performance on outer layer.

PolyOne Corporation has recently signed a licensing agreement with Ciba Specialty Chemicals to market the Ciba Shelfplus UV filter as an additive concentrate for PET bottle applications. The Shelfplus product is able to block out roughly 90 percent of UV light at up to 390 nm, providing a higher level of UV protection. PolyOne will supply the new Ciba UV filter as a UV additive concentrate for use in clear packages, or compound it into a custom color with its ComPETe pelletized colorants.

HOW NANOCOMPOSITES WILL SUCCEED

The rate of commercial advancement of nanocomposites will largely depend on the ability of suppliers and customers to reach a cost/performance balance that can be supported in the market, says Roger Avakian, PolyOne’s chief technology officer.

“Nanoclays selling in the range of $2 to $3 per pound are still expensive, compared with traditional reinforcements which sell at about 40 to 50 cents a pound,” Avakian says, noting that with price differential, nanocomposites need to offer substantial performance benefits for a particular application to be justified in terms of economics.

Given the considerable build-up about the potential of nanocomposites in plastics manufacturing, research over the past few years has helped sort out the properties and capabilities of various nanocomposite systems. Avakian says this dose of reality has been healthy for the field.

PolyOne does not currently have any commercial nanocomposite product lines, but Avakian says the company is actively following research and product development in that area. He points to the relatively recent finding that nanocomposites can improve flame retardant and barrier properties in semi-crystalline and amorphous resins as especially promising.

“We see this as another avenue to customize products and work with customers toward specific applications.”