The new X-Brace was developed in a collaboration between engineering firm Delsson and Nanyang Technological University, Singapore. 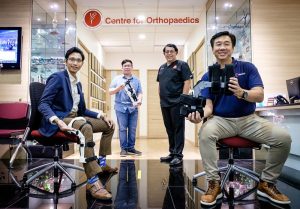 An engineering firm and a team of 3D printing specialists in Singapore have developed a knee brace that’s said to be 30 per cent lighter than conventional metal versions without a loss in robustness thanks to a design that uses plastic and assistive springs.

Called the X-Brace, the device became available on the market earlier this month. And putting it in a language that we can all understand, the researches involved describe the brace as resembling the knee brace used by Batman in The Dark Knight Rises.

The problem to be solved is this: In 2017, it was reported that 20 per cent of the elderly in Singapore aged 60 and above suffer from chronic pain, with 40 per cent of people above the age of 70 at risk of developing knee osteoarthritis. And it’s a problem here in North America too, where an estimated one-third of the population will suffer from knee pain at some point.

“Light weight and strength are crucial to this project,” said Joel Lim, an NTU PhD student who led design efforts in discussion with Delsson and 3D-printed the prototype for real-life validation tests. “We first analyzed the conventional knee braces and their current bill of material. We decided to change to a plastic material with optimized structure. Using topology optimization with a delineated stress map and 3D modeling, we then designed new structures and joints that are strong enough to withstand the flex of the knee and still assist it to move in the correct direction.”

The X-Brace is set to change the way doctors and physiotherapists treat and manage different knee conditions, officials with Delsson said, because the amount of assistance provided by the brace can be customized from 6 to 32 kg of force. “X-Brace will be revolutionary for patient recovery,” said Fabian Ong, Delsson’s executive director. “It is lightweight and does not slip, while its modular assistance load allows patient recovery to be individualized. NTU’s help in providing a quantitative methodology to reduce wall thickness and profile of the frame was crucial in achieving the weight reduction after several reiterations.”

The joint team worked to improve version 7 of the X-Brace, which consists of a lightweight nylon 6 frame designed to support up to 50 kg of bending forces. The product development is now in its 9th version, and the team aims to make it even slimmer.