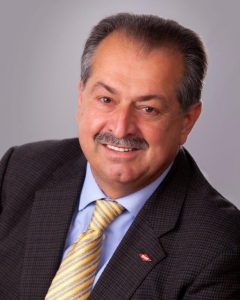 Liveris, 62, was born in Darwin, Australia, and studied chemical engineering at Brisbane’s University of Queensland. He has been a member of Midland. Mich.-based Dow’s board of directors since February 2004, CEO since November 2004, and was elected as chairman of the board in April 2006.

After being introduced to the crowd by Trump, Liveris made a short acceptance speech. “President-elect Trump, I can’t tell you, I tingle with pride listening to you, but to honour me to help you chair American Manufacturing Council to put in place the investments that you talk about, you’re paving the way with your administration, with your policies, to make it easier to do business in this country — not a red-tape country but a red-carpet country for American businesses,” he said.