While 2018 ended with strong plastics machinery shipments in North America, 2019 has started soft, according to new figures from the Plastics Industry Association’s Committee on Equipment Statistics.

While 2018 ended with strong plastics machinery shipments in North America, 2019 has started soft, according to new figures from the Plastics Industry Association’s (PLASTICS) Committee on Equipment Statistics (CES).

The shipments value of primary plastics machinery (injection molding and extrusion) in North America declined in the first quarter of 2019, CES said in a new report. The preliminary estimate of the shipments value from reporting companies totaled US$273.0 million – 27.6% lower than the fourth quarter of 2018. Injection molding shipments fell 26.3% and single- and twin-extrusion equipment shipments decreased 24.8% and 46.2%, respectively. Year over year, the value of shipments for single- and twin-screw extrusion equipment rose 19.8% and 8.3%, respectively. 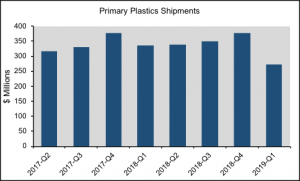 “First quarter data usually comes in soft, but the declines reflect the expectation of weaker U.S. and global economic growth,” said Perc Pineda, PhD, chief economist of PLASTICS. “Price effects were also at play in the first quarter. The producer price index on industrial machinery manufacturing has been on a decline from its peak in the third quarter last year.”

CES also conducts a quarterly survey of plastics machinery suppliers that asks about present market conditions and expectations for the future. In the coming quarter, 70% of the respondents expect conditions to either improve or hold steady. As for the next 12 months, 60% expect the market to be steady-to-better. While growth expectations for the industrial and packaging markets remained strong, a weaker global economic forecast, the unresolved U.S.-China trade issue, and the anxious anticipation surrounding the passage of the U.S.-Mexico-Canada Agreement (USMCA) by the three countries involved were reflected in the survey results.

On the international front, plastics machinery exports totaled US$363.1 million, with Mexico and Canada remaining the largest U.S. export markets. Exports to Canada and Mexico in the first quarter were US$77.7 million and US$72.9 million, respectively. As previously projected by PLASTICS, plastics machinery exports fell short of US$400 million – following the US$416.5 million in exports in the fourth quarter last year.

“Demand in the plastics industry is expected to remain positive against the backdrop of slower U.S. economic growth this year,” Pineda added. “However, plastics machinery makers should also consider that weaker global economic conditions will have knock-on effects on the industry.”