In a joint statement, 16 industry associations representing key sectors of the Canadian supply chain are demanding an end to the blockades. 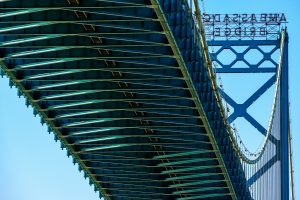 Multiple blockades at some of the busiest routes linking Canada to the United States are disrupting supply chains of major car companies and others, leading to production stoppages and threatening Canada’s economy and trade with the U.S., its biggest trading partner.

A Feb. 10 joint statement from 16 industry associations “who represent key sectors of the Canadian supply chain” is demanding an end to the blockades.

“The Canadian business community is urging all levels of government to work together in bringing an immediate end to the current blockades and disruptions at our country’s border crossings and key trade corridors,” the statement said. “Hundreds of millions of dollars in cross-border trade, which includes critical supplies and perishable items, are being impacted or lost because of ongoing blockades. Canada’s economy is being threatened as thousands of trucks and millions of dollars in cross-border trade that typically go through these entry points every day is being disrupted. Our borders are essential trade arteries that feed businesses and Canadians with essential goods, food, medicine, and critical industrial components that fuel our economy and support our critical infrastructure.”

The statement also warned that ongoing interruptions at Canadian border crossings and on key trade corridors will exacerbate supply chain disruptions. “All levels of government must work together to develop tailored solutions for each unique border crossing in Canada to prevent future disruptions,” the statement concluded. “Canada’s trade and transportation infrastructure, which is crucial to the lives of Canadians and their livelihoods, must be protected.”

Automakers that have already been suffering from a global shortage of semiconductors needed to power their cars are being affected in particular by the partial shutdown of the Ambassador Bridge, which connects Detroit with Windsor, Ontario, and which is the busiest international border crossing in North America in terms of trade volume, carrying more than 25 per cent of all merchandise trade between the U.S. and Canada. For example, automaker Stellantis has said that its Windsor Assembly Plant had to cut short its two shifts on Feb. 8 due to parts shortages caused by the Ambassador Bridge closure.

The border blockades derive from demonstrations in Ottawa, which began nearly two weeks ago when loosely organized groups of truck drivers and others converged on the city to protest vaccination requirements for truckers crossing into Canada from the U.S.