GM Canada marks one million masks made at Oshawa operations

The automaker has been contracted by the federal government to produce 10 million masks in total. 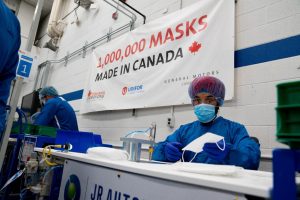 Less than two months after production began, GM Canada’s Oshawa Operations produced its one millionth mask out of the Canadian Mask Making (CMM) room for the federal government.

Navdeep Bains, minister of Innovation, Science and Industry and Anita Anand, minister of Public Services and Procurement, were on hand at the plant on July 10 to mark the milestone.

The automaker has been contracted to produce 10 million masks by the feds, and is manufacturing them at cost at its Oshawa, Ont. plant for the Public Health Agency of Canada.

GM Canada received its Medical Device Establishment License on April 22, and in just over three weeks, sourced materials, built a clean room with enhanced safety protocols, installed the required equipment, and recalled and trained 60 workers for two shifts of production in Oshawa.

Official start of production began on May 26, and GM Canada implemented a series of safety measures to protect team members through pre-entry health screening, physical distancing and enhanced on-site cleaning during production.

“Thank you to our government for their leadership and partnership as we work towards producing 10 million masks,” said Scott Bell, GM Canada president and managing director, in a July 10 statement marking the one millionth mask.