Made possible in part by a $2 million pledge from Toray Plastics, the new University of Rhode Island engineering complex gives Toray naming rights for building's atrium.

With financial help from flexible film maker Toray Plastics (America) Inc., construction has begun on a new US$125 million engineering complex at the University of Rhode Island (URI).

The project is the largest construction project in the university’s history, and is set for completion in the summer of 2019.

The new building will house seven of the eight university engineering programs: biomedical, chemical, civil, computer, electrical, industrial, and systems and mechanical. Toray’s gift grants the company naming rights for the atrium of the new building. 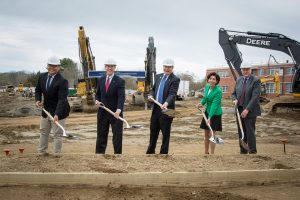 “Students coming out of the university, and specifically the College of Engineering, are exactly the type of workforce we need in Rhode Island in order for us to succeed locally, nationally, and even internationally,” Brandmeier said in a statement. “The new buildings, labs, and work spaces will enhance the skills and abilities of the next generation of URI engineering graduates, making them even more valuable to those of us in the state who depend on their talent and expertise.”

In addition to its US$ million pledge, Toray has contributed another US$2 million in gifts to URI’s College of Engineering, primarily supporting the Toray Plastics (America) Inc. Engineering Fellowship and the Toray Plastics (America) Inc. Scholarship for undergraduate students. The company also offers internships and sponsors special engineering design projects for students to pursue during their senior year.