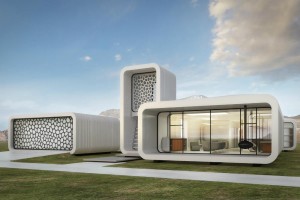 An artist’s rendering of the 3D printed office.

A 3D printed office is to set up shop in Dubai, as the first initiative of the city’s previously announced Museum of the Future and part of a larger focus by the city on major cultural projects.

The 2,000-square-foot, one-storey building will be constructed in the centre of Dubai using a 20-foot-tall 3D printer. The machine will create the parts at the actual site, as opposed to having them printed elsewhere and shipped in.

The project is the result of a partnership between Dubai and WinSun Global, which includes the Chinese 3D printing technology firm WinSun plus investors, as well as architecture and engineering firms Gensler, Thornton Thomasetti, and Syska Hennessy. WinSun creates the exterior of the building with a mix of cement and construction waste, layer by layer, “a process much like how a baker might ice a cake,” the company said. The printed concrete is treated with special hardeners to ensure that each layer is able to support the next one. The parts are then joined together to create the building. Fibre reinforced plastic and glass fibre reinforced gypsum will also be used in the building’s construction.

The building is to serve as the temporary headquarters for the staff of the Museum of the Future, which was announced back in March as a place to showcase innovation and produce futuristic innovations in various fields including healthcare, education, energy and transportation.

That space is expected to open in 2017 in a seven-storey, oval ring-shaped structure near the Burj Khalifa, and the newly announced 2,000-square-foot office space will be located nearby.

A small digital fabrication facility and a 3D printing exhibition space will be housed on-site.