Two participants in two different plastics industry golf tournaments in Ontario got tastes of just how great it can be – not to mention how profitable – by shooting holes-in-one. 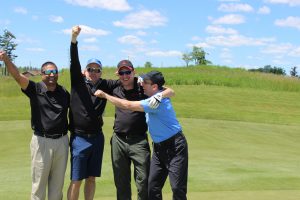 Terry Randell, second from left, celebrates his ace with the other members of his foursome. Photo Credit: Society of Plastics Engineers

At the 51st annual golf tournament of the Ontario chapter of the Society of Plastics Engineers, held on June 2 at Piper’s Heath Golf Club in Milton, Ont., Terry Randell shot an ace on the eighth hole. “The eighth is a 140-yard, par 3 with the pin on the left side of the green,” said Vijay Kudchadkar, SPE Ontario’s golf coordinator. “There’s a water hazard in between the tee blocks and the green. It was a tough shot.” Randell won a cash prize of $1,600 for the achievement. 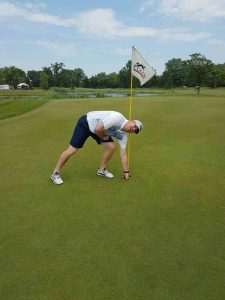 Two days later, at the 31st annual Canadian Association of Mold Makers golf tournament, held on June 4 at Fox Glen Golf Club in McGregor, Ont., Jason Greening, a project manager with Jesse Garant Tetrology Center, North America, sank his own hole-in-one, also on the eighth hole. Greening picked up a $5,000 cheque for the ace, plus an additional $500 for being closest to the pin. 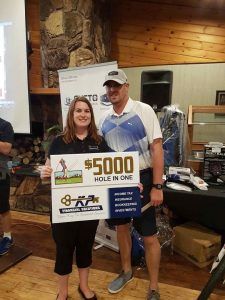