The line, which was installed in April 2016 in the plastics recycling facility of Canadian water bottler Ice River Springs in Feversham, Ont., has delivered higher than expected production output and minimized the purge rate by 40 per cent.

The line, which was installed in April 2016 in the plastics recycling facility of Canadian water bottler Ice River Springs in Feversham, Ont., has delivered higher than expected production output and minimized the purge rate by 40 per cent, Ice River Springs said.

“The new filtration system has improved our purification process, reduced waste, and improved performance to a level at, or beyond the commitment made by Starlinger,” the firm said. “With the Nordson Flex Disc filter integrated into our PET recycling system, the melt loss that accumulates during the backflushing process in the course of the filter cleaning is down to 1.4 – 1.7 per cent – a figure that’s a lot lower than normal in PET bottle-to-bottle recycling processes.” 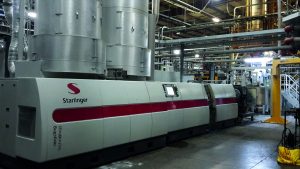 The new line has a production capacity of 1,900 kg/h and recycles pre-washed PET bottle flakes from curbside collection in Canada. Ice River Springs is based in Feversham, and has set up plants in Canada and the U.S. Ice River Springs is running its own PET bottle-to-bottle recycling operation, Blue Mountain Plastics in Shelburne, Ont., which is equipped with washing and recycling lines and produces bottles made of up to 100 per cent recycled PET.

In 2011, Ice River Springs received the Letter of Non-Objection for its bottles produced from rPET from the Bureau of Chemical Safety/Food Directorate, Health Canada. The company runs a vertically integrated operation that also includes preform production and bottle filling plants, which complete the system for closed loop PET bottle recycling. The company is said to be the only beverage company in North America to operate such a system.

Starlinger is headquartered in Vienna, Austria.