Precimold founder and president Gunter Weiss has sold the firm to Jack McDonald, an entrepreneur based out of Montreal. 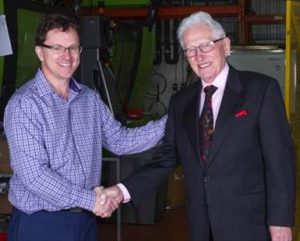 Candiac, Que.-based contract manufacturer, custom injection molder, and tool maker Precimold Inc. has been sold by its founder and president Gunter Weiss to Jack McDonald, an entrepreneur based out of Montreal.

Founded in 1966, Precimold produces technical parts for the automotive, defense, medical, and electronic markets from a 48,000-square-foot facility. The firm employs approximately 75 workers and operates 20 injection presses with clamping forces up to 300 tons; the majority of Precimold’s injection molding units are Engel machines since Weiss wanted to stick to one major supplier to simplify training and to build-in production flexibility. Precimold also carries ISO 9001, TS 16949, and ISO 13485 accreditations; and operates class 10,000 and class 100,000 cleanrooms.

“I have been open to selling Precimold for the past ten years but I was waiting for the right fit,” said Weiss, who recently turned 83 and is now retiring…maybe. “I told Jack that I live three minutes from the plant, and that if he needs me he can call me anytime of the day or night,” Weiss said.
And Weiss believes he found the right fit it in McDonald, who has a commerce degree from Montreal’s Concordia University and 35 years of experience in a wide range of private sector businesses. “My job isn’t to make the molds or shoot the plastic, since Gunter has put already put together one of the best teams in the industry for that,” McDonald said. “My job is to create a culture that creates purpose for every member of the team and that relentlessly drives our main message: that our parts are important to everyone’s health and safety, including our own.”

The sale of Precimold was finalized in late 2016, and in the short period of McDonald’s ownership the firm has already invested over $500,000 in a new enterprise resource planning system with extensive production control and data capture capability, a Zeiss O-Inspect 543 with Calypso software for product inspections, and new IT infrastructure. “We will be spending substantially more than that over the next twelve months on a new website, digital marketing, and training development, but the biggest investments will be in moldmaking and production upgrades,” McDonald said. The firm is also considering buying some electric injection presses next year, he added.

“I’m looking forward to spending the next 30 years at Precimold,” McDonald said. “I’m not sure I’ll still be working at 83, the way Gunter did, but I hope I have half his energy and drive.”