Plastics machinery shipments down in Q1 but “poised for growth,” report says

Shipments of primary plastics machinery (injection molding and extrusion) in North America came in lower in the first quarter of 2021 than in fourth quarter 2020, according to new figures compiled and reported by the Plastics Industry Association’s Committee on Equipment Statistics (CES).

“The preliminary estimate of shipment value from reporting companies totaled US$334.9 million in first quarter 2021, an 11.1 per cent decrease from the previous quarter,” CES said. “However, compared to first quarter 2020, plastics machinery shipments increased by a solid 31.9 per cent. This was the third consecutive quarterly increase in plastics machinery shipments year-over-year.” 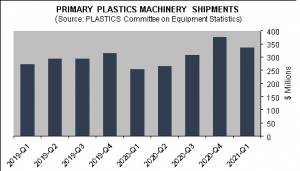 The CES also conducts a quarterly survey of plastics machinery suppliers that asks about present market conditions and expectations for the future. In general, outlook among plastics machinery suppliers is “very optimistic,” it said.“The equipment sector of the plastics industry came out of 2020 strong. The much-improved trade outlook will be a positive for plastics equipment suppliers on top of what can be expected as another good year for plastics equipment demand,” Pineda said. In the coming quarter, 89.5 per cent of respondents expect conditions to improve or hold steady compared to a year ago, lower than the 96.0 per cent that felt similarly in the previous quarter. As for the next 12 months, 93.0 per cent of those surveyed expect market conditions to be steady-to-better. This is higher than the 89.8 per cent in the Q4 2020 survey.