Ontario extruder cuts into the market for wood railroad ties

Just because something grows on trees doesn’t make it inexhaustible. Take wood. It doesn’t just grow on trees, it is the tree. But people still want to use less of it if possible. A prime example is wooden railroad ties. The material of choice for the railway industry since it first began way back when, timber ties are increasingly being replaced by alternatives, not only due to concerns about deforestation — millions of hardwood trees are consumed to make railway ties in North America every year — but also because of creosote, which has long been used to prevent the wood ties from rotting. Creosote has recently been classified as a probable carcinogen, and creosote-treated railway ties also have the nasty side effect of creating toxic run-off water that in turn contaminates the surrounding surface soil and river ways. How bad a problem is it? Each wooden tie can leach up to 15 kg of creosote over its lifetime. For this reason, Europe will ban the use of creosote-treated wood rail ties by 2018, and similar legislation in Canada might not be that far off.

Which is where Duropar Technologies Inc. comes in. The Brampton, Ont.-based company has developed composite rail ties made entirely from difficult-to-recycle plastic and asphalt wastes, and is on the cusp of bringing the product to market.

Duropar got its start over 15 years ago making paver bricks from a mix of post-consumer plastic, primarily recycled consumer blue box waste and industrial recycled material. Recently, and with funding through the Sustainable Development Technology Canada program, the company made the transition to extruding rail ties after spotting a golden opportunity for its technology. “The immense North American railway market, which needs approximately 24 million new ties per year, is seeking a replacement for wood,” said Duropar president Jim Inglis. “But current alternatives often have performance problems — steel rusts and can have conductivity issues, for example — and are considerably more expensive than wooden ties, all of which makes composite ties the best available replacement option.” 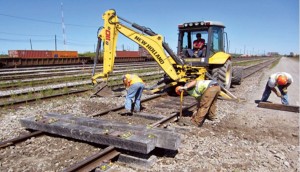 The fact that the market is ready and willing doesn’t mean that every make of composite rail ties is able — a product has to be strong, durable, and capable of withstanding a repeated pounding from heavy traffic while holding fasteners and maintaining its shape and location relative to the rails. To this end, Duropar is conducting in-track testing with CN Rail, CP Rail, and GO Transit. Upon test completion within the next few months, Inglis said, Duropar’s goal will be to build a full-scale production plant to fulfill production orders in 2016. (The company currently runs a prototype operation in a rented Brampton facility to fill orders for product tests.) “We’re looking for an investment partner to bring the product to market, after which we can become self-financing,” he explained. “We’re seeking an investment of approximately $4 million, to be raised by way of an offer of between 25 per cent and 35 per cent in the equity of the company.”

Once the company is self-financing and full-scale production is underway, the sky might just be the limit. “The first Duropar products will be rail-related — a rail tie and a railway crossing system. The markets for these products are large and lucrative, and we’ve already received inquiries from several countries in Asia and Europe,” Inglis said. “Further infrastructure products include highway and building structures such as retaining walls, erosion barriers, and security fixtures — any application where strength, durability, and economy are paramount. The ultimate goal is international licensing of our patented technology.”

At which point, don’t be surprised if Duropar joins the elite ranks of products that replace those that actually grow on trees.