The pandemic has demonstrated the problems with reliance on just in time inventory and offshore suppliers, and Baltimore-based auxiliary equipment maker Novatec Inc., working in Canada with Maguire Products Canada, has responded by introducing its Novatec Now service, which guarantees shipment of select auxiliary equipment in 48 to 72 hours (excluding trucking delays), or Novatec pays the freight. 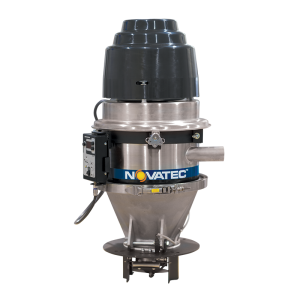 Novatec is using its 75,000 square foot assembly plant in Glen Mills, Pa., near Philadelphia, to handle the assembly and storage of the equipment being stocked for the Now service, which is all made from domestic components. “Our Glen Mills plant has always been dedicated to our build-to-inventory equipment, and has always kept equipment in stock,” said Tim Noggle, Novatec’s senior vice president of sales. “What’s different now is the scale – we’ve assured that we won’t run out by upping our inventory levels dramatically and buying as many components as possible in anticipation of future orders. We’ve also pre-bought manufacturing space and capacity from a number of our key vendors in case of even higher demand – in some cases we’ve bought capacity to the end of 2022 because we know we’re going to need it.”

In total, Novatec Now places more than US$20 million of Novatec’s inventory at immediate disposal, with more to come. “We plan to add items like central conveying controls and components, central conveying accessories, and other NovaDrier and NovaWheel models to the Now program in the next few weeks,” Noggle said. “We’re taking this one step at a time, and getting input from our customers, because we don’t want to overwhelm our suppliers and we want to tailor it to demand.”

“Novatec has put a lot of planning into the logistics and execution of this service, and we’re excited to be part of it,” said Maguire Products general manager Brian Davis. “Maguire Canada is going to be maintaining a large amount of stock of XSL, GSL and VL vacuum loaders. Our competitors are foreign-owned and don’t have the ability to match this – their delivery times might be as long as 6 to 10 weeks, and there’s nothing they can do to shorten that.”

According to Noggle, the short delivery times of Novatec Now are just as important as having the equipment stocked domestically. “Having inventory is one step of the process; being able to get it to the customer on time is the other,” he said. “We’re doing everything possible to streamline delivery, including ironing out compliance issues ahead of time. Part of this involves us self-certifying the equipment whenever possible. We are a UL-certified shop and that allows us to certify compliance to CUL at our build locations so that our Canadian customers and partners have a much easier time of importation and implementation in their plants. Maguire Canada is an integral part of that mechanism and our success is due in large part to our partnership with them.”

Novatec Now guarantees the shipping time of equipment ordered, Noggle continued, and in Canada this is 72 hours from order entry until it departs from Maguire Canada; in the U.S., it’s 48 hours for loaders and receivers, and five days for dryers and pumps. “If we can’t meet that promise for any reason other than trucking delays, Novatec will pay the freight,” he said.