Nova looks back on 2016, highlights sustainability in new report 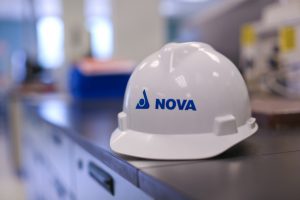 Chemical supplier Nova Chemicals Corporation spelled out its sustainability goals, and also documented some of its highlights last year, in its recently released “2016 Sustainability Report”.

The report drew attention to some of the Calgary-based firm’s key leadership changes and notable corporate developments.

“Changes in leadership were made to the Nova Chemicals’ management board,” the report said. “Julie Beck joined Nova Chemicals as senior vice president and chief financial officer; and Arnel Santos as senior vice president of operations.” In late 2016, the report also noted, Nova “successfully completed the Polyethylene 1 (PE1) expansion project. “This is the first new reactor of its kind in the Americas in over a decade, Nova said. “The new capacity allows [us] to meet the growing demand for flexible films used in food packaging, heavy-duty sack and can liners.”

A significant company change occurred subsequent to the reporting period for the report, Nova continued. “In July 2017, Nova completed the acquisition of Williams Partners L.P.’s ownership interest in the Geismar, Louisiana olefins plant. The plant produces approximately 880,000 tonnes of ethylene annually and is located in the largest refining and petrochemical production hub in North America. With riverfront access, our adjacent 525 acres of undeveloped land represents a significant opportunity for future growth.”

In May, Nova marked the grand opening of the transformed Centre for Performance Applications in Calgary, a facility that supports customer development work.

Also in 2016, the report continued, Nova sold record polyethylene volumes of over 1.8 million tonnes; completed the development of four new products; and achieved several monthly, quarterly and annual polyethylene production records and its expandable styrenics manufacturing reached a cup production record. “And in October, we joined Borealis and Borouge as participants at the K-Fair, the world’s premier fair for the plastics and rubber industry, held in Dusseldorf, Germany.”

Nova also launched the 1NOVA Program, described by the report as an effort to “establish one set of best practices and systems to optimize how we work together and provide a foundation for growth.”

Finally, the firm noted that it conducted “several workshops [in 2016] with internal teams representing each of our primary stakeholders to determine our sustainability priorities. The most material topics for Nova include personal, process, transportation and product safety, greenhouse gases and air emissions, business ethics and product sustainability.”

“At Nova Chemicals, our purpose is to shape a world where products vital to our health and happiness are even better tomorrow than they are today,” president and CEO Todd Karran said in an accompanying news release. “Both in our products and those we enable, we are committed to innovation that makes people’s lives healthier, easier and safer.”

The complete Nova report is available at this link.