Canada and Mexico remained the top export markets for U.S. equipment suppliers in the third quarter, according to the Plastics Industry Association's committee on equipment statistics.

Shipments of primary plastics machinery – injection molding and extrusion – in North America increased by double-digits in the third quarter, according to statistics compiled and reported by the Washington, DC-based Plastics Industry Association’s committee on equipment statistics (CES). 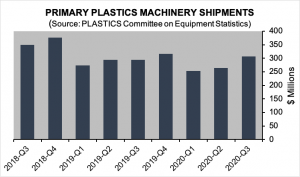 “Shipments of plastics machinery have increased for two consecutive quarters,” said Perc Pineda, chief economist for the trade association. “The double-digit increases in the third quarter are in sync with the quicker-than-expected turnaround in other plastics end-markets in addition to healthcare and consumer essentials.”

Most likely, shipments of machinery will also increase in the final quarter of 2020 as the economy continues to recover, Pineda added.

The CES also surveys plastics machinery suppliers every quarter about present market conditions and expectations. In the coming quarter, 76.0% of respondents expect conditions to either improve or hold steady compared to a year ago – higher than the 36.0% that felt similarly in the second quarter. “As for the next 12 months, 89.8% expect market conditions to be steady-to-better, significantly above the 48.0% in the previous quarter’s survey,” CES said.

“It appears that the second quarter was the trough of the business cycle, as the economy slowed due to the pandemic,” Pineda said. “Recent data point to an industry that’s moving towards the pre-COVID-19 level of activity. The industrial production index on plastics products manufacturing rose for five consecutive months through September.”

“The plastics industry is an essential industry, and businesses stayed open to ensure uninterrupted supply for products in the healthcare sector,” Pineda continued. “The pace of economic recovery, however, is not without risks, and its path will depend to a great extent on the containment of the coronavirus. Nevertheless, the overall outlook for plastics machinery and the industry has turned more favorable in recent months.”