The increase in shipments was consistent with higher plastics production.

The shipments of plastics injection molding and extrusion machinery in North America increased in the third quarter of 2021, according to a new report from the Committee on Equipment Statistics (CES) of the Plastics Industry Association.

According to CES, the preliminary estimate of shipment value from reporting companies totaled US$333.8 million for July through September, which is an increase of 8.8 per cent compared to the same quarter of 2020, and up four per cent over the second quarter of 2021. 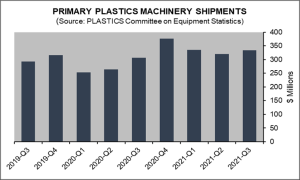 “Plastics equipment shipments picked up in the third quarter as the economy continued to emerge from the pandemic,” said Perc Pineda, Ph.D. the chief economist of the Washington, D.C.-based Plastics Industry Association. “Moreover, the increase in shipments was consistent with higher plastics production, which in the third quarter rose 4.2 per cent or 5.9 per cent from a year earlier. The upward-sloping demand for plastics equipment has not changed.”

The World Trade Organization now expects a 10.8 per cent increase in global merchandise trade this year, CES said, which is an upward revision from its 8.4 per cent projection in March.