But shipments are up six per cent from the same period a year ago, the Plastics Industry Association says, and the business outlook for 2023 remains positive.

Shipments of injection molding and extrusion equipment in North America contracted in the third quarter, according to new statistics compiled by the Committee on Equipment Statistics (CES) of the Plastics Industry Association.

A preliminary estimate totaling US$353.8 million represents a 14.4% decrease from the previous quarter, but the estimate increased by 6% from last year. 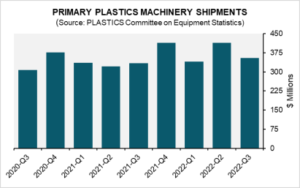 “It can be argued that the slowdown in plastics machinery shipment in the third quarter is in sync with the cooling of the U.S. economy. However, compared to the quarterly shipments in 2021 – a stellar year for the plastics industry particularly for plastics equipment suppliers – this year’s third quarter shipments remain above the first three quarters’ shipments last year,” said Perc Pineda, Plastics Industry Association’s chief economic officer. “Historically, there is a bump up in shipments in the fourth quarter. This was the case even before the COVID-19 pandemic. Given supply chain issues due to the pandemic, which have stretched delivery lead time, it would not be surprising to see shipments in the fourth quarter to be above the third quarter. There is also a huge year-end push for businesses to get their manufacturing capacity in gear for the coming year. This should support stable demand for plastics equipment next year, albeit lower than this year because of moderating economic growth.”

“The outlook for the next 12 months virtually unchanged from the second suggests that plastics equipment suppliers have considered slower economic growth ahead and have not strategized accordingly for the 2023,” Pineda said. “In sum, the third quarter data is consistent with the projected growth in plastics machinery shipments for the second half of 2022. However, the U.S. manufacturing sector continues to face headwinds – elevated energy prices, rising interest rates, and inflation – which could weigh on the economy’s manufacturing output in 2023.”