The Canadian auto parts maker is fielding a two-woman team for the 2022 Rebelle Rally, an off-road rally covering over 1,550 miles of desert terrain in Nevada and California. 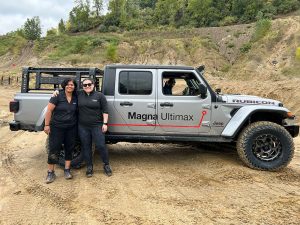 Auto parts supplier Magna International is fielding a two-woman team for the 2022 Rebelle Rally, an off-road rally which runs Oct. 6-15, covering over 1,550 miles of desert terrain in Nevada and California.

The Rebelle Rally, now in its seventh year running, is the first women-only off-road navigation rally of its kind, and is run without the use of GPS or other digital mapping devices. The event features eight full days of driving, from North Lake Tahoe to Imperial Sand Dunes, California.

In a statement, officials with Aurora, Ont.-based Magna say the Magna team has been preparing for the rally with training at the Holly Oaks ORV Park in Metro Detroit featuring a 9,000-square-foot peak, called Mt. Magna, designed to replicate the experience of popular, massive rock formations in Moab, Utah. “The pair have also tested their skills at the Silver Lake Sand Dunes in West Michigan as they prepare to head to the rally in October,” Magna said.

Figueroa and Anandavally will drive a Jeep Gladiator Rubicon featuring a Magna Ultima in the rally. Magna says the two-speed transfer case with a 4:1 low-range ratio distributes engine output to the front and rear axles and the low-range option improves performance off-road. “The proven Magna Ultimax will give the team the 4×4 capability and performance needed to traverse the desert terrain,” it said.