Aurora, Ont.-based Magna said the paint shop will support its contract manufacturing site in Graz, Austria, about 75 kilometres away.

As the result of what it calls “a full book of business” at its contract manufacturing facility in Graz, Austria, Ontario-based automotive parts supplier Magna International Inc. will build a second paint shop 75 kilometers away in Maribor/Hoce, Slovenia. 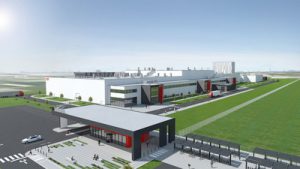 An architects rendering of Magnas future paint shop in Slovenia.

Aurora, Ont.-based Magna will spend approximately $100 million on the new facility, which is scheduled to start operations in 2019.

“High demand for engineering and contract manufacturing by automakers such as BMW, Mercedes-Benz, and Jaguar Land Rover has resulted in the Graz facility running at high capacity utilization,” Magna said in a statement. “Magna Steyr currently manufactures the BMW 5 Series and the Mercedes-Benz G-Class, with the Jaguar E-PACE beginning to launch now and Jaguar I-PACE expected to launch early in 2018. Taking into account these and other upcoming programs, Magna Steyr is expected to contract manufacture approximately 200,000 vehicles per year by 2018.”

Magna broke ground on the Slovenia paint shop Oct. 17 and said it has already begun recruiting. The plant will eventually employ about 400 workers.