Shipped to food packager Meiwa Embalagens, the cling PVC cast film line is capable of producing thicknesses in the range of 8-16µm, with a die width of 2.2 meters.

The cling PVC cast film line is capable of producing thicknesses in the range of 8-16µm, with a die width of 2.2 meters. The winder can produce 4 ups across the web at a line speed of 250 meters per minute.

“Meiwa was very happy with our first installation of the cling PVC cast film line, but wanted to tweak the second line for some specific requirements,” said Jim Stobie, Macro’s CEO. “Macro offers a unique value proposition from our competitors in that we custom engineer all our lines to suit different customers’ specific needs, so we were happy to accommodate MEIWA’s requests.” 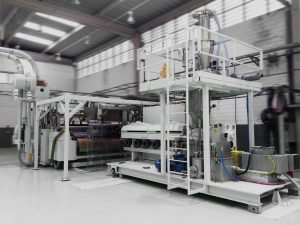 Headquartered in Arujá in the state of São Paulo, Brazil, Meiwa is a manufacturer of polymer film in the food packaging industry. In addition to the two PVC cling film lines, the company also has a line from Macro to produce polystyrene foam.

Founded in 1978, Macro manufactures blown, cast, and biaxially-oriented coextrusion lines for multilayer films up to 13 layers. The machines are used in the food packaging, medical, and industrial markets.