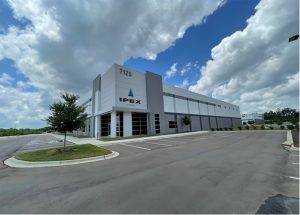 In a move that doubles its warehouse space in the region, Canada-based pipe extruder Ipex has opened a new 200-square-foot distribution centre in in Charlotte, N.C.

Located at Creekside Commerce Center in southwest Charlotte, the new distribution centre will serve Ipex’s customers in North Carolina, South Carolina, Virginia, West Virginia, Tennessee, and Kentucky. Scanning and material handling equipment, and forklift and pedestrian safety equipment are all being evaluated for installation in the new year, Ipex officials said in a Nov. 24 news release.

The new distribution centre follows the company’s other strategic openings in Garland, Texas in the U.S., and in Winnipeg, Man., and Dartmouth, N.S. In July, Ipex also announced that it’s building a manufacturing plant in Pineville, N.C.