The four-hour courses are meant to capitalize on an “amazing” sales streak.

Japanese injection press maker Toshiba Machine Co. Ltd. has been riding a sales wave in Ontario lately, and the firm’s Canadian sales representatives are working hard to keep it going.

Injection Depot, headquartered in Barrie, Ont., and Industrial Solutions, headquartered in Goodwood, Ont., which partner to rep Toshiba nationwide, held two separate four-hour training courses in Markham, Ont. on July 27, drawing a total of 40 people from 15 different injection molding shops from across the province. “The course dealt primarily with controller training for Toshiba all-electric units, and the instructor was Adam Petersen, who is the technical support manager for Toshiba Machine Co. of America,” said Chris Butcher, Injection Depot’s sales manager. “Some of the course attendees were dedicated Toshiba customers; others were not, but are leaning towards buying their first Toshiba press. For both groups, the goal of the course is to instruct them on how to maximize the benefits of Toshiba’s all-electric machines.” 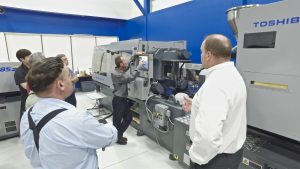 The course is being held at Toshiba Machine Co. of Canada’s facility in Markham, Ont., and Butcher, his colleagues at Injection Depot, and Industrial Solutions head Spaso Crngarov invested considerable time and resources into getting the space ready for the attendees. “We brought in an 85 and a 250 ton Toshiba all-electric machine, repainted and remodelled the spare parts area, and turned it into a demonstration space,” Butcher said. “Toshiba supported us completely during the redesign of the area and in putting together this training course.” 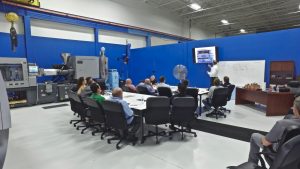 Paying close attention during the course.

Injection Depot and Industrial Solutions plan another round of courses six months from now, Butcher said. “In the meantime, we’ll follow up these general courses by offering our customers more detailed scientific molding courses from Toshiba Machine and training solutions providers such as Paulson Plastics Academy,” he added.

The July 27 training courses come in the midst of a hot streak for Injection Depot and Industrial Solutions. “We just sold a 2,000 ton all-electric machine in Ontario, which we’re very excited about,” Butcher said. The two firms have also staged a series of very successful Toshiba machine trails at the Markham, Ont. facility. “We have held 11 machine trials for some of our customers over the past few months – pitting our Toshiba machines against some of the other injection units they have in their facilities – and have sold 9 other machines as a result,” Butcher said. “Given the relatively small size of the Canadian market compared to the U.S., it’s an amazing level of success.”