Construction of the complex began in early 2018, and it is expected to convert locally sourced, low-cost propane into 525,000 tonnes per year of polypropylene. 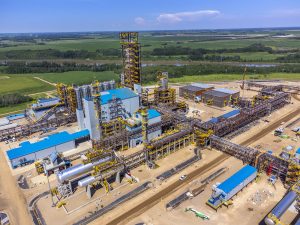 The Heartland polypropylene plant where Heartland Polymers are produced is the only plant producing this polymer in Canada. Photo Credit: CNW Group/Inter Pipeline Ltd.

The new Heartland Polymers petrochemical complex, which has been under construction since 2018 in Strathcona County, Alberta, northeast of Edmonton, has begun initial production of polypropylene (PP) resin.

“Heartland…is the only one of its kind in North America, offering the market one of only two new sources of PP in over a decade,” the release said. “Due to its unique location, modern design and technology and transport optionality, Heartland is expected to be one of the most sustainably produced, reliable options in the industry.”

“The PP plant has been producing pellets since late June with polymer grade propylene (PGP) from our storage cavern,” said Jim Madro, senior vice president, petrochemicals. “The entire Heartland complex remains on schedule for an integrated start-up in the third quarter of this year, at which point Heartland will begin commercial production.”

Construction of the Heartland complex it is expected to convert locally sourced, low-cost propane into 525,000 tonnes per year of PP; once fully in-service, Heartland is expected to create a step change in annual cash flow generation for Inter Pipeline, with approximately 70 per cent of the output contracted on a nine-year weighted average.

The PP plant was commissioned using PGP feedstock from a cavern at Inter Pipeline’s Redwater olefinic fractionator. The primary source of feedstock will be an on-site propane dehydrogenation (PDH) plant, where propane will be turned into PGP. The PDH plant is expected to enter integrated service with the PP plant in the third quarter of this year, Inter Pipeline officials said, making it the first integrated complex of its kind in North America. “The optionality of both the storage cavern and direct on-site PGP production ensures exceptional reliability for customers,” they added.

Inter Pipeline is a major petroleum transportation and natural gas liquids processing business based in Calgary.