Amir Karim, chief operating officer of Quebec-based Polykar Industries, is the 2016 Leader of the Year.

The Canadian Plastics Industry Association has named Amir Karim as its 2016 Leader of the Year Award recipient. Karim, 48, is the chief operating officer of Polykar Industries, a manufacturer of PE film garbage bags and industrial and food packaging headquartered in Saint-Laurent, Que. 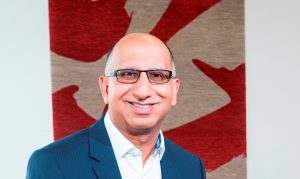 “Karim has led the corporate strategic development and sustainability arm of Polykar Industries for the last sixteen years,” CPIA said. “He passionately champions the plastics industry, driving initiatives to increase awareness of positive plastic messages for the general public. He is an advocate of environmental sustainability in plastics recycling, and recently completed a two-year term of office as chairman of the CPIA.” Outside of plastics, CPIA continued, Karim “gives a large portion of his time to voluntarily engage with several civil society institutions which promote higher education, international development, and philanthropy.”

For a Canadian Plastics profile of Karim as CPIA’s 2016 Leader of the Year, click on this link.

The other CPIA 2016 award categories and winners are:

Grantland Cameron. Cameron is an independent consultant with experience in several industries. “As an active participant in the Alberta solid-waste and recycling industry for more than 25 years, Grant has hands-on experience in the collection, hauling and processing of plastics, and has been involved with design, operation, and policy at more than 75 Alberta landfills, transfer stations, and recycling depots, and was a pioneer in the collection of multi-material, post-consumer recyclables in rural Alberta,” CPIA said. “He is a long-serving committee member of the Recycling Council of Alberta, and has been the executive director of the Alberta Plastics Recycling Association since 2007.”

Sajjad Ebrahim. Ebrahim purchased Brampton, Ont.-based rigid plastics packaging supplier Par-Pak Ltd. in 1977, and over the next 36 years built up the company into a major player, with 900 employees and over $200 million in revenue. Over the course of his career, Ebrahim has received numerous awards, including the prestigious Canada Award for Business Excellence in the Entrepreneur Category in 1993, and the CPIA’s Leader of the Year award in 2008. After selling the company in 2013, Ebrahim now devotes much of his time to philanthropic ventures.

Mirek Planeta. Planeta founded Mississauga, Ont.-based film and sheet extrusion machinery supplier Macro Engineering Co. Ltd. in 1978, which later became Macro Engineering & Technology Inc. Drawing on his background of an engineering degree in plastic and rubber processing from the University of Prague, Czech Republic, Planeta has over 30 machinery and process patents. Under his guidance, Macro Engineering won an award for excellence in exports from the Canadian government in 1995. Planeta resigned as Macro Engineering president earlier this year to concentrate on research and development.

Tom Rose. Rose was a co-purchaser of Edmonton, Alta-based rigid plastic product maker Layfield Plastics in 1977, and since then has been instrumental in diversifying the company’s product line into other markets such as environmental containment, industrial fabrics, and blown film production. Rose also helped grow Layfield from a single operation in Edmonton to its present position as a vertically integrated company with manufacturing, fabrication, construction, and distribution hubs in Vancouver, Edmonton, Calgary, Toronto, San Diego, Seattle, San Diego, Houston, North Dakota and West Virginia. He remains active in the company today.

Robert Torokvei. Torokvei, whose career at Toronto-based injection and blow molder Scepter Corporation spanned over 42 years, became president of the company in 1992 and was instrumental in transforming it into the largest manufacturer of portable fuel containers in North America, the leader in portable OEM fuel containers for the marine industry, and the largest manufacturer of plastic packaging for heavy caliber ammunition. Torokvei retired as president in June 2016.

Dr. Chul Park. Park is Distinguished Professor of Microcellular Engineered Plastics at University of Toronto. He is the founder and director of the Microcellular Plastics Manufacturing Laboratory (MPML) and the Centre for Industrial Application of Microcellular Plastics, which are both world-leading research facilities in microcellular plastics foaming technologies. “Dr. Park has invented numerous foaming technologies, and has successfully transferred them to various industrial companies,” CPIA said. “He has attracted a large number of companies to the Consortium for Cellular and Micro-Cellular Plastics; has identified the fundamental mechanisms of cell nucleation and foam expansion; and has published more than 900 papers, including 270 journal papers and three books.”

Polytainers Inc. Polytainers is a Toronto-based supplier of plastic containers to the food and dairy industry. The company’s new Ultimate series of in-mold label (IML) plastic containers is an injection molded container said to have the highest top-load per gram of resin in the North American marketplace. “The use of IML allows customers to present their brands with premium graphics,” CPIA said. “The result is a premium container, with industry-leading material utilization reducing resin consumption by approximately 20 per cent.”

Lafarge Canada Inc. Lafarge is a Toronto-based supplier of materials for the construction industry. “At locations across Canada, the company has worked to reduce carbon dioxide emissions, restore wetlands for native plants and animals, and identify waste materials that can be recycled and used at their operations,” CPIA said. “Over the past five years, Lafarge has been working towards its goal of reducing fuel-based carbon emissions by 30 per cent – one of the most comprehensive lower carbon fuel programs in the world. This work has led to a growing focus on the potential role of non-recycled plastics and related mixed plastic/fibre composites in the manufacture of cement. Where feasible, Lafarge believes that plastics should be recycled into new plastic products such that these products too are produced in the most sustainable way possible.”

Urban Polymers. Urban Polymers is a Toronto-based affiliate of Canada Fibers Ltd. The company is being recognized for its “commitment to divert valuable, usable plastic away from landfill and assist their customers in achieving more sustainable manufacturing practices,” CPIA said. The company’s high-performance polymers are sold to plastic goods manufacturers in packaging, construction, and film extrusion industries.

Marc Robitaille. Robitaille is president of Saint-Huber, Que.-based flexible packaging supplier Omniplast. “He has contributed an immeasurable amount of time, energy, expertise, and resources to improving the competitive and environmental performance of the Canadian plastics industry, including an active involvement in CPIA’s Bag Ban Task Force,” CPIA said.

Solenne Brouard Gaillot. Brouard Gaillot is CEO and founder of Anjou, Que.-based PS recycler Polystyvert Inc. “Solenne created a disruptive technology that is revolutionizing the PS market, and created her company from the ground up, putting together a dynamic team of young experts dedicated to sustainable development,” CPIA said.

Domenic Di Mondo. Di Mondo is technical director of Brantford, Ont.-based chemical supplier GreenMantra Technologies. He is being recognized for his work in developing high temperature and pressure catalysis, including his role in creating a new proprietary technology and patented process that produces synthetic waxes from underutilized plastic recycling streams, including films and bags.

Krista Friesen. Friesen is CPIA’s vice president, sustainability, and has more than 15 years’ experience in designing and developing programs to manage end-of-life materials including plastics. “Since mid-2014, she has been ably leading the development and execution of CPIA’s sustainability, advocacy and partnership programs to promote solutions that increase the recovery of plastics at their end-of-life,” CPIA said. “These programs involve collaboration with and support of governments, stewardship organizations, and others to expand plastics recycling and energy recovery.”

Geoff Woolley. Woolley is president of Surrey, B.C.-based EcoSafe Zero Waste. He is being recognized for his efforts to design and implement cradle-to-cradle solutions for source separation of organics and recyclables with a focus on diverting organic waste from landfill to commercial compost facilities. In addition to leading EcoSafe Zero Waste, Woolley has recently been selected by his alma mater, Kwantlen Polytechnic University, to sit on the School of Business Program Advisory Committee.

The awards were presented to the winners on Sept. 14, 2016 in Toronto, at CPIA’s annual Plastics Industry Leadership Awards Dinner.