The Barrie, Ont.-based plastics part maker is partnering with LaserClean to cut hours off its mold maintenance programs. 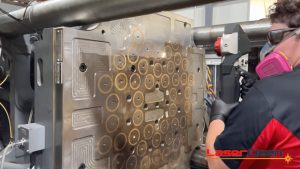 Two companies based in Ontario are partnering to solve one plastics processing-related headache.

Founded in 1966 and headquartered in Barrie – with offices in Edmonton and in Langley, B.C. — Canplas Industries Ltd. started out as a manufacturer of ABS and PVC pipe fittings for the plumbing industry, and now manufactures plumbing, ventilation, central vacuum and grease separation products for residential and commercial buildings all over the continent.

The only problem has been that heating PVC results in the out-gassing of hydrochloric and hydrobromic acids, and these acids can lead to pitting, oxidation, and other problems with a mold, die, or other metal machinery in the vicinity. “Our molds regularly formed coatings of rust and, since we need to keep them very clean, this meant frequent cleaning by hand, which took hours,” said Adam Toutant, Canplas’s maintenance manager.

Which is where LaserClean Inc. comes in. Owned and operated by Ed Gledhill, the Ajax-based company uses laser ablation – the process of removing layers of material from a solid metal by irradiating it with a laser beam – as an alternative to the chemicals and abrasive blasting systems commonly used for surface cleanings of molds. As opposed to traditional, contact mold and platen cleaning technologies such as dry-ice blasting, pressure washing, and media blasting, laser ablation is fast, safe, non-intrusive because it doesn’t use any media, and leaves virtually nothing behind but a clean surface. LaserClean has full, mobile delivery capabilities, which means the company can bring the laser beam cleaning technology directly to a customer’s site. And unlike other firms that offer laser ablation services, LaserClean only sells the service, not equipment. “Most companies that deal with laser ablation are distributors looking to actually sell the lasers,” Gledhill said. “We’re not selling anything, we just want to clean molds – that’s what we do, and we’re unique in that.”

Toutant discovered LaserClean during an online search two years ago, contacted Gledhill, and Canplas’s mold cleaning program has been a different story ever since. “Ed now comes in during our shutdowns as part of our regular preventative maintenance program for our injection molding machines, and he can clean an entire mold – even a large mold – in just a few minutes; it’s fast and easy,” Toutant said. “LaserClean is also the first company I’ve ever found that is doing this cleaning service as a service, instead of trying to sell me a laser.”