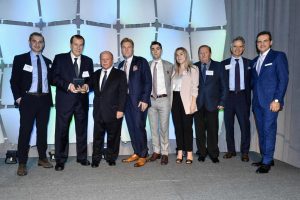 Canadian plastics industry pioneer Vic De Zen has been given the Lifetime Achievement Award from the U.S.-based Vinyl Institute.

“A leader in the vinyl building products sector for over 50 years, Mr. De Zen’s companies have been consistent innovators, successful exporters, and prolific job creators,” the Washington, D.C.-based industry association said in a statement. “Not only did he invent the industry in Canada, he has re-invented it several times over. Arriving in Canada with his wife, Angelina, and $20 in his pocket, Vic built a multi-billion dollar worldwide vinyl conglomerate. Vic’s manufacturing plants which are marvels of automation produce quality economical products that compete with materials having shorter life cycles; this has helped grow the use of vinyl in building and construction products.”

In addition, the Vinyl Institute noted, De Zen’s companies “are always seeking advanced and better processes to convert recyclable products into raw materials to be used in new products.”

De Zen, 77, launched Vision Extrusion Group of Companies in 2008, which manufactures such products as windows, doors, fencing, and decking. Born in Italy, De Zen moved to Canada in 1962 and founded plastics company Royal Group Technologies Ltd. in 1970, which quickly rose to become one of Canada’s largest plastic makers, specializing in PVC pipe, window profiles, and other plastics products.