The Manitoba-based company is using the first KraussMaffei QuickSwitch line in North America. 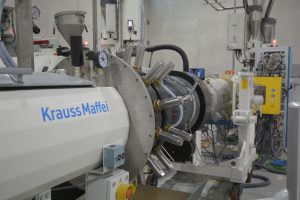 Family-owned Encoma was founded in 2020 as a manufacturer of multilayer HDPE pipes for water supply, geothermal and cable protection applications, as well as for underfloor heating, and is now the first plastics manufacturer in North America to use KraussMaffei’s QuickSwitch system, which automatically adjusts pipe dimensions.

The core component of each QuickSwitch line is the adjustable calibration basket, KraussMaffei said, which is set to new pipe dimensions fully automatically and within a given time without having to stop the production line. “The waste produced during the ‘quick switch’ period is limited to a cone-shaped piece of material, which contributes not only to higher efficiency but also to enhanced sustainability in hose production,” company officials said. “In addition to changing the pipe dimensions at the push of a button, QuickSwitch also ensures fine adjustment of pipe wall thickness and pipe centering.”

Encoma is producing pipes with diameters ranging between 25 and 63 mm for commercial, residential, and agricultural customers on the first of three lines to be installed at the Elm Creek site, which is located about 50 kilometers west of Winnipeg. Three months after installation of that first line, Encoma ordered two more lines, including a second QuickSwitch line and a five-layer polyethylene of raised temperature (PE-RT) line specifically designed for underfloor heating pipes. 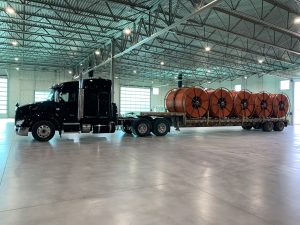 One of the first loads of three-layer HDPE pipe with silicone inner layer from Encoma. Photo Credit: KraussMaffei Extrusion GmbH

“For us as a newcomer in this branch of industry, it was extremely important to have a competent partner at our side who would be able to set up a turnkey plant on our premises and also provide training and support,” Encoma plant manager Derek Hofer said in a news release.