Waterloo, Ont.-based face shield and mask manufacturer The Canadian Shield has launched its new Medical Mask Automation and Vision Systems, designed to allow the company to compete with overseas manufacturers, and sell their turnkey medical mask manufacturing lines and vision systems to other producers around the world to improve their operations. 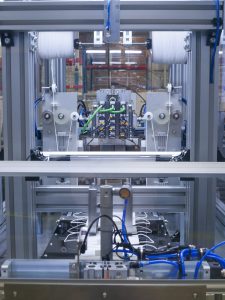 “What started as a response to a critical shortage of PPE for our frontline healthcare workers has transformed into a high-tech enterprise, creating Canadian intellectual property and world-leading solutions for globally competitive manufacturing of medical devices,” Jeremy Hedges, founder and CEO of company, said in a news release.

Since March of 2020, Hedges continued, Canada and other nations around the world faced the reality of being dependent on global supply chains – from countries like China and Malaysia in particular – for critical pandemic supplies. But there were problems:  These countries have different electrical, safety and quality standards, which fail to meet Canada’s requirements for safe use. “In many cases, new manufacturers relying on imported equipment have quickly realized that these seemingly cost-effective systems are expensive to modify and maintain, and yield high scrap rates in production,” The Canadian Shield’s news release said. “Typical imported systems cost between $70,000 and $85,000 depending on the upgrades and rework required to bring them to Canadian standards. These systems, though advertised at much higher speeds, cap out at around 75 parts per minute, have large downtimes and scrap rates between 15 and 30 per cent, not to mention high maintenance costs for replacement parts.”

Developed through strategic partnerships with several Waterloo-area automation companies, The Canadian Shield alternative is intended to save on both cost and time required to produce PPE. Starting at $300,000 with full safety certification, The Canadian Shield Mask Automation System produces double the number of masks per day than imported systems with just one operator. The system pays for itself in under 10 months, the company said, and then pays dividends in overall operating margins. Inline vision and part rejection ensure that only quality masks leave the machine, the company said, minimizing labour costs and maximizing customer satisfaction. “The Vision System is also sold separately as a modular addition for inline mask inspection and rejection,” the company said. “Starting at $30,000, this system ensures that only quality masks leave the machine and significantly reduces labour costs for quality control.”