An extrusion machinery expert, Planeta founded Macro in 1978, and the initial focus of the company was improving air ring design, leading to the invention of the dual lip air ring. 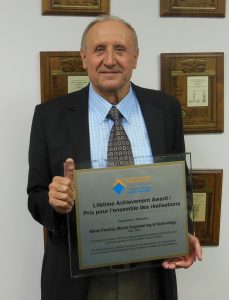 Planeta with his Lifetime Achievement Award in 2016.

Armed with an engineering degree in plastic and rubber processing from the University of Prague, Czech Republic, Planeta immigrated to Canada in 1974, and began his career working as an engineer with Bonar Packaging Films in Burlington, Ont. He founded Macro in 1978, and the initial focus of the company was improving air ring design, leading to the invention of the dual lip air ring.

Under his guidance, Macro won an award for excellence in exports from the Canadian government in 1995. Planeta filed more than 30 patents for machinery and extrusion processes over the years.

Planeta resigned as Macro’s president in 2016 to concentrate on research and development, and was given a Lifetime Achievement Award from the Canadian Plastics Industry Association in that same year.

He officially retired from the industry on June 14.

“Mirek was always leading the company through growth, improvements, and tremendous change which made it possible to expand from a component supplier to offering complete extrusion systems and in the process became a global industry leader in high barrier and specialty film processing technology,” said Macro’s president and CEO Jim Stobie. “Today Macro has equipment installed and operating in over 40 countries worldwide.”

“While we’ll miss him and his leadership, we wish him the best of luck in his retirement and his new ventures,” Stobie added.