Founders of equipment maker Future Design have returned to the industry.

Some families just seem drawn to certain activities. If your surname’s Wallenda, there’s probably a better-than-average chance you’ll wind up walking a highwire at some point in your life. For a Canadian plastics equivalent, consider the father/daughter team of Robert Krycki and Dawn Krycki-De Santis. Well-known as the founding family of the now-defunct blown film equipment supplier Future Design Inc., the pair is back with Cyber Plastic Machinery Inc. (CPMI), a Brampton, Ont.-based blown film equipment start-up with a distinct mission. 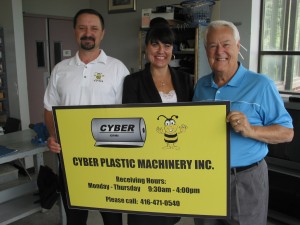 Founded in April, CPMI is designed to fill a gaping hole in the blown film industry by servicing and upgrading all brands of existing equipment. And it’s a bigger, deeper hole than you might think. “There’s a large amount of blown film machinery in need of refurbishing in North America, particularly in Canada – as U.S. firms have encroached on Canadian blown film businesses, funds for new equipment are usually the first things to get cut,” Robert Krycki said. “We service all blown film equipment, upstream and downstream, and there really are no other companies in the blown film industry focusing on this now.”

CPMI can perform straight machinery repairs, but that’s just the tip of the iceberg. “Our bigger goal is to improve equipment, so that a customer will be capable of doing different processes without the costs associated with new equipment,” Krycki said. “If a processor wants to transition from making linear trash bags to high density bags, for example, we can change out the parts that are necessary – the die gap, the screw, and the air ring configuration – for a fraction of the price of a new machine. There’s a huge installed equipment base out there, but many blown film shops haven’t kept up with the times technologically because it’s such a customized industry, often customized to the resin used for a particular application.”

LEAN AND MEAN
The company also believes it has found a way around a problem that’s tripped up more than one Canadian blown film equipment firm over the years. “Historically, it’s been very hard to keep blown film operations in business in Canada without a streamlined operation and very low overhead,” Dawn Krycki-De Santis said. “CPMI jobs out as much of the work as possible to the professionals, including some well known blown film industry veterans. This helps us to keep our own costs low, and pass those savings along to the customers.” No surprise, then, that the company’s staff size – all of three people – is as stripped down as it gets: Dawn Krycki-De Santis, executive sales and marketing; Robert Krycki, director of R&D; and operations manager Liviu Sas, a Future Design veteran.

Repair and upgrade is a good way to get a foot in the door, but it’s not all that CPMI does. “We’re a full-service environment, providing sales, engineering, consulting, and the design and manufacturing of new equipment for the blown film industry – including servicing any Saturn air rings, which Gloucester Engineering acquired from Future Design but no longer promotes the brand,” Robert Krycki said. “Our first manufacturing project is a new air distribution manifold and air cooling ring. We’ll also build auxiliary equipment to support and enhance blown film production. Our objective going forward is to design the products ourselves, outsource the manufacturing of most of the parts, and assemble and test the finished product in-house. We are also contacting various universities to connect with students to help us improve our products – we have experience building laboratory lines for the universities, and we’re going to draw on that heritage.”

Export is a major part of CPMI’s mandate. “The current strength of the U.S. dollar has made us more competitive in a market that has imported so much equipment from Europe and Asia,” Liviu Sas said.

And the company’s progress is being covered in its own “Cyber Buzz” monthly newsletter. “It brings our customers up to date on our progress, as well as our new innovations and equipment,” Dawn Krycki-De Santis said. “We also sell used equipment, and we cover that in the newsletter as well.”

That highwire analogy we used at the outset? It’s not a bad way to sum up the perils of the blown film industry in Canada, unfortunately, but at least CPMI is off to a good start on its own walk across the tightrope. “We’ve had a fantastic start-up, and have already shipped equipment to Asia and other parts of the world,” said Liviu Sas. “Many larger OEM firms in the blown film industry are not investing in R&D. We are, and I think this gives us an advantage.”