In an Aug. 18 statement, Woodbridge, Ont.-based Athena said that Harold Luttmann will serve as the new acting CEO in addition to handling his current role of chief operations officer. The 87-year-old Schad will now take over the role of chief commercial officer on a temporary basis. 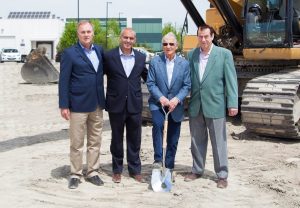 Harold Luttmann (left) and Robert Schad (third from left) at the groundbreaking ceremony for Athena’s 150,000-square-foot facility in Woodbridge, Ont., in June 2014.

The management shift is the latest development in a busy year for Athena. Since April, the injection molding machine maker emerged victorious from a lengthy legal battle with Husky, and officially opened a new $45 million, 150,000-square-foot facility next to its original building in Woodbridge.

The lawsuit against Schad and Athena filed by Husky – the Bolton, Ont.-based company Schad founded in 1953 and sold to private equity investors in 2007 – was dismissed on April 22. Husky had alleged that Schad and Athena misused confidential information in their designs for Athena’s injection molding presses. Athena employees had access to new Husky technology used at injection molder Niigon Technologies Ltd. in MacTier, Ont., but the judge ruled Athena did not make material use of the knowledge. A financial settlement has now been reached.

“The lawsuit caused me an enormous amount of stress – it was probably the most stressful thing I have ever been through – and consumed a lot of our time and resources,” Schad recently told Canadian Plastics. “What bothered me the most, however, was that my integrity was being questioned. So I’m thrilled that Husky’s claims were defeated.” Schad gave detailed testimony at trial, and claims that Husky’s suit cost Athena $5 million in lost profit from 2013 to 2015.

With the shadow of the lawsuit removed, Schad said, he can finally give his complete attention to the business of Athena. And business looks promising. “We are on track to double last year’s machine shipments in 2016,” Schad said. “Repeat orders, mainly for PET preform and closure applications, are waiting to be filled. And the first systems integrating Athena machines with third-party in-mold labeling automation were recently installed in North America.”

Athena is also looking forward to hiring more people in Woodbridge and elsewhere. “As we grow in North America through relationships in sales and service, we have stationed a service representative in the Pennsylvania-Ohio area, with Atlanta and Chicago to follow,” Schad said.

New products under development include a 4,500 kN injection press to extend the firm’s machine tonnage options, and cube and rotary-table technology for multi-material molding. Athena will also debut a closure-molding package this year, to complement its PET container molding machine offerings. “We decided early on to focus on injection molding machines to make them completely modular,” Schad said. 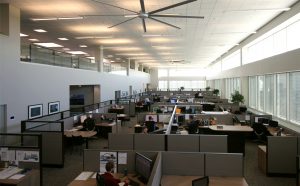 The office area of the new facility.

The new 150,000-square-foot machine manufacturing facility is another important step in Athena’s growth. “The new plant is where our machines are being built and where the majority of our employees now work; to support just-in-time machine assembly, we have linked mechanical engineering, controls, IT, and purchasing staff in a collaborative environment,” Schad said. “Spare parts, service, sales, and corporate functions are consolidated in our previous headquarters, which is now the customer service building.” It won’t exactly come as a surprise to those who know Robert Schad that the new building provides a unique energy-efficient and automated infrastructure. “It features geothermal cooling and heating, daylight-harvesting LED lighting, automated high-density part storage, and state-of-the-art inspection equipment,” Schad said. “The mold trial and extended run area is supported by resin conveying and drying systems, as well as dedicated chillers for each machine.”

In addition to ironing out the succession question at Athena, Schad knows the company still has other work to do. “We still have to bring the new facility completely on-stream,” he said. “It will be the end of the year before we have achieved a proper production flow.”