“The requirement from R&D/Leverage for a machine to test and run molds for various PET machines led to the development of this new series,” said Heidi Amsler, the company’s sales and marketing manager. “The result is a very-small-footprint fully-functioning, production-capable, single-cavity PET stretch blow molding machine. It can be used in labs, for small production runs, pilot production, customer trials, mold run-offs, material testing and preform testing. The options of neck orientation, hot fill and preferential heating can all be included on this machine, which can make up to 11 million 500 ml water bottles per year.”

The unit for custom blow molder Poliflex S.A. de C.V., meanwhile, is a used single-cavity L12 machine that was originally installed at a U.S.-based customer. “The L12 had been outgrown and was traded in on a new three-cavity L32. The L12, which was manufactured in 2007, was retrofitted with a preferential heating oven, which was a Poliflex requirement,” Amsler said. “The machine was completely refurbished…and Poliflex was able to start-up the machine and begin production in their plant themselves and it is currently running four days a week.” 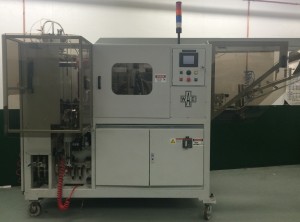 Amsler is based in Richmond Hill, Ontario.

The LM series comes in two bottle size ranges. The L12X is for bottles ranging from 20 ml to 2 litres, and the L15X makes bottles from 20 ml up to 5 litres.