iMFLUX processing software is available on Haitian servo-hydraulic and Zhafir electric injection molding machines purchased by molders in Canada and the U.S. 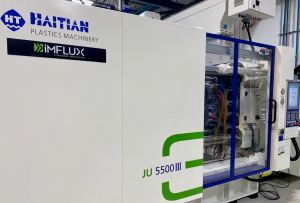 Injection molding machine supplier Absolute Haitian and iMFLUX, a subsidiary of Procter and Gamble, have signed a distribution agreement to offer the opportunity to integrate iMFLUX processing software as an option on Haitian servo-hydraulic and Zhafir electric injection molding machines purchased by molders in Canada and the U.S.

In an April 30 news release, officials with Absolute Haitian said the partnership provides its customers “with access to the iMFLUX low constant-pressure molding platform that automatically recognizes changing conditions and adapts in real-time, creating alternative processing opportunities for conventional molders.”

“With the integration of iMFLUX, processors can run more sustainable materials such as post-consumer recycled content (PCR) on Haitian and Zhafir molding machines with less energy, wear and waste,” the release said. “The platform helps optimize most molding processes.”

At virtual events held by iMFLUX (on May 25) and Absolute Haitian (on June 10), injection molders will have the opportunity to watch an active machine cell demonstrating iMFLUX technology on a 618-ton Haitian Jupiter III two-platen, servo-hydraulic press. The JU5500 III will run a four-cavity housewares mold (two bowls, four spoons and a lid) made from recycled polypropylene, demonstrating the ability of the iMFLUX platform to facilitate processing family molds and PCR. The machine cell integrates automation featuring the Hilectro servo robot and Fanuc collaborative robot.

Absolute Haitian, based in Worcester, Mass., is the exclusive sales and service partner in the U.S. and Canada for Haitian International, in Ningbo, China.